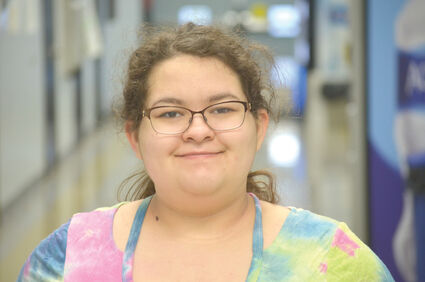 The southern accent is largely undetectable, but as Jerzie Coleman became more animated, the y'alls started flying. It was fun to hear, as were some of the descriptions of the cuisine she's been missing.

"The food here," she said. "I don't know how y'all survive. I'm sorry, but it's really bland. What's the key thing over here? Game and fish? Hunting is really big down in the south too, but stuff would have flavor. It would have some kick to it. It was so good, but it was really bad for eatin'."

A typical dinner would include biscuits. "Not like the loaves of bread that y'all have here," Jerzie said. "I'm talking actual flaky biscuits that fall apart in your mouth."

Jerzie came to Wahkiakum from Mississippi, by way of Georgia, moving here the summer of 2019.

She enjoys academics, and is thoughtful about history, darker themes in literature, and social issues. Art is another great interest, and while she's always drawn, she got more serious about the craft when she was in fourth grade.

Jerzie's plans for life after high school are shifting. If she takes a year off, will she be like others who have had good intentions, but never revisit the idea of university? Or perhaps she will attend Lower Columbia College and take prerequisites, before going on to study wildlife sciences.

"I wasn't really sure what I wanted to do back in Georgia, but after I took Mr. Rooklidge's environmental class, that was a really big stepping stone for me to say, man I could do this for the rest of my life, and I would not complain," Jerzie said. "Actually going outside and getting to see the studies that these people do was really nice. You don't just sit in a classroom, and you don't just sit in an office and do paperwork all the time. That's a part of it, but a good part of it is going out and getting samples, which is really fun."

Maybe her future was set by a crawfish placed in her hand while the class collected samples.

"It's pincers were up in the air, and it slowly turned them down toward the flesh of my hand and pinched it," Jerzie said, laughing at the memory. "Ow!"

Jerzie is the daughter of Valerie and Kurtis Kucera.