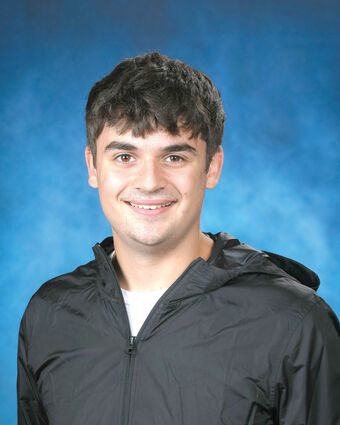 Kaleo Silva is headed to Washington State University in the fall to study mechanical engineering.

“I think the thing that made me want to do engineering was taking physics last year,” he said. “I enjoy math, but when you get to higher level maths like calculus, you are considering hypothetical situations, but physics has real world applications.”

It was those real world applications that drew him to engineering, but it was a panel of engineers working in the different specialties who spoke to Wahkiakum students via Zoom that helped him settle on mechanical engineering.

Kaleo was “pretty dead set on going to WSU,” and didn’t apply anywhere else. He’s looking forward to exploring the area, and having that comfortable mix of being just far enough away from home for a bit of independence, yet close enough to come home if he wants or needs to do so.

This year he’s enjoying an American Government/Global Issues class he is taking with Don Cox, where they are currently studying different forms of governments, like plutocracy or kleptocracy.

“Mr. Cox is one of my favorite teachers,” Kaleo said. “I really enjoy his teaching style. He doesn’t really teach out of a book or a curriculum, he teaches us about what he finds interesting, and in turn we find it interesting. I think his charismatic and positive attitude really benefits the morale of the class as well.”

Kaleo has been playing golf for five or six years, and credits the high school coach, Nick Vavoudis for his interest in the sport.

“When I was younger, we moved in next to Nick V.,” Kaleo said. “He said when you’re old enough, you should come play golf. I started doing summer clinics when I was old enough to do that and then I joined the high school team. I’ve been playing ever since.”

He also joined the trapshooting team. Kaleo already enjoyed shooting with his father, so it was a natural progression to take on a more competitive role.

“I really enjoy it,” Kaleo said. “It gives you the ability to be more proficient at it, and it teaches you good firearm safety and awareness because you are shooting alongside four other people, so you really have to be paying attention and know where you are pointing your gun.”

Kaleo is the son of Kellie Mendez and Kalani Silva.