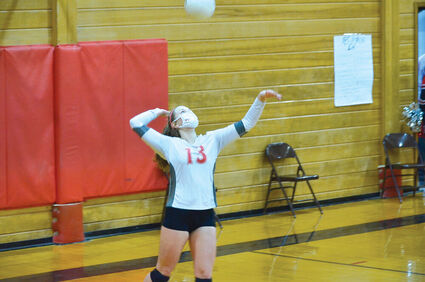 Megan Leitz sets up her serve.

The Wahkiakum Mules volleyball team won three of four matches this week, to bring their record to 4-1.

"This was a good team effort and we really focused on improving our energy and hype," Hurley said. "The girls decided this was an important focus for us tonight and they made strides."

On Tuesday, the Lady Mules celebrated senior night, and honored 11 seniors on the team, as well as their senior manager. 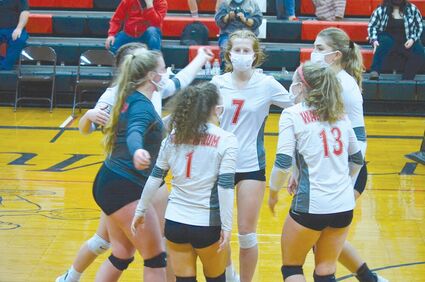 The Lady Mules celebrate a point against Adna on Tuesday night.

"Adna scrapped and kept the ball alive," Coach Kayli Hurley said. "It was hard to find a place to put the ball away and that resulted in some pretty fun rallies over the course of the night."

"We were really looking forward to the competition this match, and as a team we were able to pinpoint some places where we can really grow," she added.

"Reigha Niemeyer played some stellar defense," Hurley said, "and Shantelle Shervey came in with some big service runs to build our momentum when we needed it."