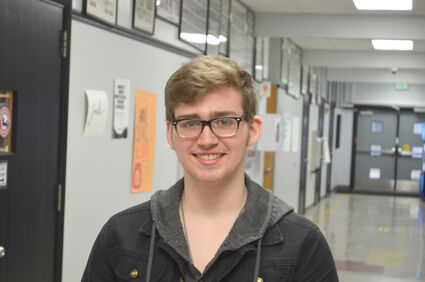 Daniel Martin is ready to go.

He's been studying German, and along with other members of the Wahkiakum High School German Club, started fundraising last year for the biannual trip to Germany, set for this year.

"I don't know if you know," Daniel said, "but something came up and we were not going to be able to do that anymore. Something about a pandemic."

While that particular trip to Europe might be out for now, he now has a passport, and the whole world will one day open up again.

Daniel plays the drum set with the pep band. They finally got to play this Saturday, while the Mule football team won their first home game of the season.

He especially loves playing Seven Nation Army or Paint it Black, but in the end, he likes the challenges that come with every song.

The last three years, he has happily traveled with the pep band to Spokane for the state basketball tournament.

"We'd go to the store, and then back to the hotel, where we'd move all our tables into one room, and make some kind of pasta and chicken and eat together," Daniel said. "It was a lot of fun. It was state, we had a bus. Someone would get an idea and we'd get excited and just do it."

Everything is better when you are surrounded with enthusiastic friends. Even a trip to Denny's has created fond memories.

As for a favorite teacher, it was hard to choose.

"I feel like Wahkiakum has an amazing faculty," Daniel said. "I love all of my teachers, but I really enjoy Mr. Cox's classes because of the intelligent discussion that goes on. He's friendly. We get to talk to him just as another person."

"I feel like as a direct result of the class, I have become a lot more aware of what is happening in the world, which is enjoyable" he said.

In his spare time, he has taken up longboarding.

He hasn't settled on a particular career, but is considering law enforcement, teaching, and advertising.

"I enjoy interacting with people," Daniel said, "I'd like to make a difference in people's lives."

Daniel is the son of David and Teresa Martin.