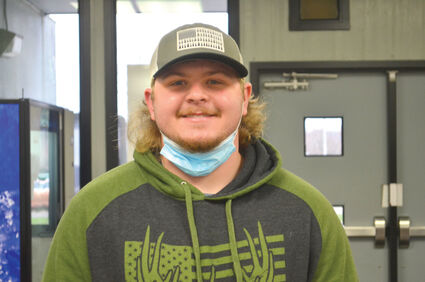 During the school week, Ashden is picking up another skill from Hurley in a directed studies class. Taxidermy.

This avid outdoorsman, who likes to fish and hunt, is currently learning how to do a European mount, using wild pig skulls with tusks.

"It costs so much to go to the taxidermist," Ashden said. "I thought it would be a lot more cost effective and cool to learn to do it myself. Some people might think it's gross, but I've been around it a long time. It doesn't really bother me at all."

Ashden is the son of two teachers, Marc and Tiffany Niemeyer. It wasn't hard for him to pick his favorite teacher.

"He's my role model," Ashden said. "I really look up to him in that sense. I really enjoy being able to spend time with him and being in his class."

If there is any downside to having both parents at the school, well, even that has an upside. He gets things in on time.

"They are always pushing me to do the best that I can," Ashden said. "And sometimes dad will tell me to turn something in, and mom will tell me five minutes later."

Ashden plays three sports a year, but baseball is his favorite. He's been rounding the corners of the diamond since he was four and typically spends half of every inning on the pitching mound or first base.

"I think that baseball is the hardest sport to be good at," Ashden said. "I like the challenge. Going three for 10 batting is exceptional, but if you shoot three for 10 in a basketball game, that's not very good."

Ashden has been to state in every sport, but playing in the basketball tournament in Spokane last year was a highlight.

"The atmosphere is so cool, being down on the floor with all the people in seats around you," he said. "Being with your friends makes it even better."

Fishing for tuna is a treasured memory, one he hopes to repeat.

"They are straight muscle, a rocket," Ashden said. "If they bite, they'll just run forever, taking out line constantly. You will reel them up to the boat, and they will take off another 30 feet."

Ashden plans to attend Northwest Lineman College this fall before beginning an apprenticeship somewhere in the northwest.