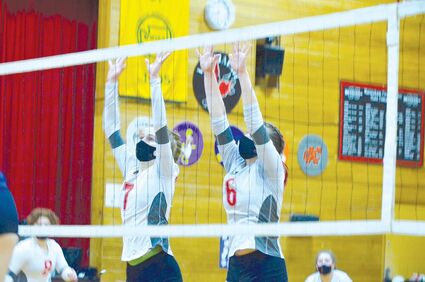 Teylor Sauer and Jordyn Watson look for a block.

The Wahkiakum Mules volleyball team split games on Monday and Tuesday with two more nights of travel planned this week and district play on the horizon.

Despite the loss, Coach Kayli Hurley was hopeful.

"There is continual improvement," she said. "We're making positive steps forward. Those were the names of our game tonight. Looking at the set scores, it's pretty obvious we didn't put our best foot forward right off the bat, but my girls didn't roll over."

"Jansi Merz had some huge kills and big blocks," she added, "and Reigha Niemeyer was flying all over the floor and put up some solid serve receive. Teylor Sauer, new in the middle for us, played well overall and MJ Neves worked her tush off running the offense." 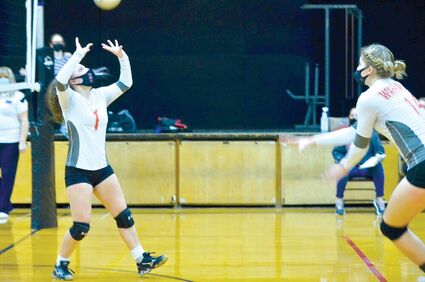 M.J. Neves, who had 21 assists on Tuesday, set up a kill for middle hitter Jansi Merz.

"Aside from the first set, these were hard fought sets on both sides," Hurley said. "Napavine scrapped and kept the ball alive. We had to up our consistency and scrap after the first set. My girls made a mental switch, pulled it together and went to battle."

"Rebekah Neves came in after set one and sparked a change for us. Her consistency was key to our turnaround in the match," Hurley added.

Merz had 17 kills, five blocks, and four digs. Niemeyer had 10 digs, three kills, and "was all over the back court." Megan Leitz had four kills and a few assists. MJ Neves had 21 assists. All four were 100 percent from the service line.

The Lady Mules traveled to Toledo on Wednesday and are scheduled to play in Kalama tonight (Thursday). District play begins on Saturday, possibly at home.

Check the Wahkiakum Eagle Sports Report page on Facebook which will be posting information and scores as they become available.