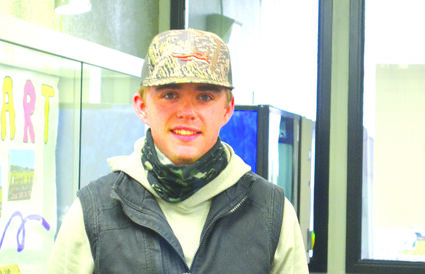 If you are looking for Beau Carlson, you might find him at work.

He loves baseball, which he's been playing since he could walk, and the outdoors, but nothing elicited a response like the one I got when I mentioned work.

"Oh man," Beau said. "My favorite part of work is the money aspect of it, but I think that's almost everybody's favorite part. You get a good paycheck out of it to buy the things you like. I would say I've been working since I was probably five, even if it wasn't a real job. I used to do a bunch of stuff just for dad, filling oil jugs, or anything like that just to help him out. The very first day I got my driver's license, I had a job. I was at work all day. Ever since then, every summer, I go to work every single day. I work every chance I get during the school year. I pick up jobs where I can get them. And If I work all day, and get home late, and dad has stuff he needs done, I'll go do that too."

Beau and his friend, Bryson Havens were busy working a truck on Sunday when I caught up with them, putting on new brakes and adding a CB. They've spent their lives learning how to do useful things from the men around them.

On his days off, he likes to go out in the woods in his truck or on hikes with his friends. They look for sheds, but they are happy just be out there together, talking, laughing, and having fun.

Beau is heading to Meridian, Idaho in October to attend Northwest Lineman College. Following a four month class, he said, he'll have his certificate and will be looking for work.

In 2018, Beau suffered a life threatening brain injury playing football for the Mules.

"A lot of people think of it as a negative," Beau said, "but I'll definitely say that my brain injury was a positive. You have this perspective of life that your last day is every single day, so don't take it for granted."

Making money isn't the only kind of treasure. Beau already knows that his entire high school experience is something he'll never get back, or that precious time with friends, and all the other little things.

Beau is the son of Leihanna and Brad Carlson.