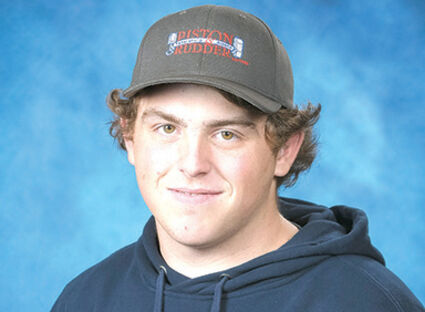 But that's okay. This young man already knows the value in a day of hard work, and is ready for more.

"I'm just [at Wahkiakum High School] to get out of here and get a job," Bryson said.

And to be fair, there is probably the added benefit of seeing his friends.

He isn't certain what that future job is just yet, but he knows what he will be doing the day after graduation. He's headed up to Petersburg, Alaska to fish.

"I don't know when I'm coming back," he said. He later softened the statement to two or three years. He's pretty certain he doesn't want to do it forever.

His step-father is a fisherman, and so Bryson grew up on the water. He went up to Alaska for the first time the summer after his freshman year for a period of three weeks and has been back every summer since, working all season long.

For fun, he enjoys hunting big game, or just being out of doors.

"I just like to be outside, enjoying the peace and quiet," Bryson said.

He's been stalking deer, elk, and bear every season since he was able to pass the test, around sixth grade.

"I've gotten a bunch of deer, a couple bear and one elk," Bryson said.

The most challenging, and therefore his favorite, has been elk.

"They are smarter and more skittish," Bryson said, "and they have to be above a certain amount of points."

Fishing for work is good, but so is fishing for fun. He hasn't been springer fishing yet this season, but he has fished for smelt.

"It all depends on our government and how they are feeling, but there have been four openings for smelt gill netting so far this year," Bryson said. "We didn't do too bad, but we didn't do too good. The prices dropped a lot and the poundage wasn't what it should be."

After Alaska, Bryson is considering becoming a lineman, but that will require more school, something he is hoping to avoid.

Whatever he ends up doing, it's sure to be out of doors, and the kind of hard work that brings satisfaction at the end of the day.

Bryson is the son of Nicole McKinley and step-father John McKinley.