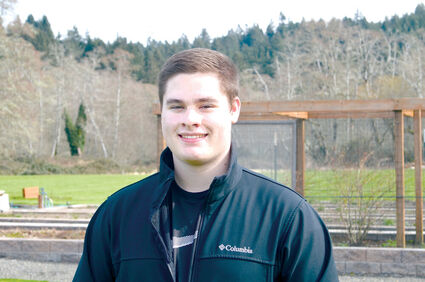 Eli Moon has missed sharing a classroom with his classmates, but the benefits of the Running Start Program were too good to refuse.

"I thought it would be really smart to get my associates degree while in high school," Eli said. "I could get to a job or my bachelor's degree a little sooner and it's a little cheaper. I was also allowed to continue to play sports. It was a win/win situation for me."

While he might miss weight lifting and hanging out with his friends, he's added to them, having made more at Lower Columbia College.

He's currently taking classes in criminal justice, nutrition, and speech. With everything online, he's been watching a lot of video lectures and trying to keep up with reading and homework.

"It's been interesting to speak into my computer for speech class," Eli laughed. "I can do it as many times as I want to and submit the video I like the most."

His favorite teacher at Wahkiakum is Marc Niemeyer, who has also been one of his football coaches.

"I enjoyed playing for him and being in his class," Eli said. "He tries to bring the best out in people. He is very genuine, nice, and caring. A really good role model and leader."

Another role model for Eli is his dad, who works for Washington State Patrol.

That pride might have something to do with Eli's decision to go to Brigham Young University-Idaho, where he plans to earn a general bachelor's degree before finding work in law enforcement. Eli isn't certain he wants to be a police officer, and has been researching different ways he can contribute, possibly working with youth in juvenile detention.

In his free time, Eli enjoys leatherwork, a craft that a member of his church started teaching him a couple years ago.

"It caught hold," he said. "I make wallets, bags, book covers. It's really fun, and it passes the time."

Football is his favorite sport, but he also loves to throw the discus in track and field. He took up wrestling his junior year after several seasons of basketball.

"I really love the coach, Frankie Mendez," Eli said. "You work as a team in wrestling, but when it comes down to it, it's a solo competition. It's who has put in more time and effort, and who has the better heart and technique. I loved that. I loved being in that state.

Eli is the son of Shawna and Brad Moon.