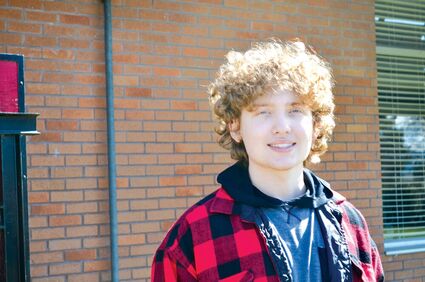 Luke Bohn, pronounced "boon," loves film and hopes to work in the industry one day.

Wanting a change of scenery, Luke relocated to the area from Portland when he was 16, after his cousin, Kaden Anderson, who attended school in Wahkiakum, encouraged him to give it a try.

"I always wanted to go to school with him, because he was one of my best friends," Luke said. "I had good friends in Portland, but you couldn't always trust them. It just felt like there were better people here, people who would look out for you, instead of just being one of 1,500 in a school. In general, the group of friends I've made here are probably the best group of friends I've ever had."

Luke's favorite subject is probably history. He is fascinated by stories of Russia and ancient Greece, and the Spartans, so he likes his history class, but what he really loves right now is his directed studies class.

"I'm really into film, and I like making movies," Luke said. "I'm getting another opportunity to make a movie in my directed studies class."

His favorite genre so far is films from the 1970s, including The Godfather and Rocky. And one of the most beautiful movies he's ever seen, which he watched with his mom, was a silent French film made in 1928 called The Passion of Joan of Arc.

He has two favorite teachers: Don Cox and Joel Stetzer.

"I've never had a teacher like Mr. Cox," Luke said. "He seems like he actually cares, and he actually supplies you with the tools to learn. Mr. Stetzer is just like that, but he is also really funny and lighthearted at the same time."

Luke will attend Oregon State, Cascades in Bend, Ore., in the fall.

"I like the smaller community," he said. "It's going to give me opportunities to go abroad and do stuff I like. My mom and I found this program where you can go to Czech Republic and study film for half a semester. I thought that would be a great opportunity."

Luke sees wisdom in having a Plan B, so if he doesn't end up working in film as a cinematographer or writer, teaching might be another way to go.

When he isn't driving his 1994 Volvo named Daryl, Luke likes to draw and paint, and spend time with his friends.

Luke is the son of Stacee Larson and Don Bohn.