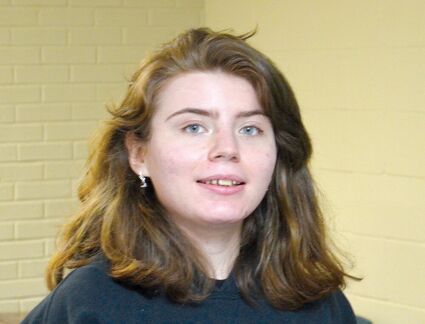 Evangeline Davidson has been celebrating her birthday since she was 12 for unusual reasons. It's the anniversary of the day she and her mom moved to Cathlamet, an end to a year of homelessness.

The pair put nearly everything they owned in storage at the beginning of that year, except the things they needed. Those things were packed into a Suburban, which they lived in when they weren't staying in hotels.

"So, that was fun," Evangeline said facetiously. "I saw a lot of people. It was an interesting time. Mom was living off gambling, and it was a night to night thing. It was stressful, because it truly was a survival situation. A lot happened. I learned from it."

After a year, the pair decided they could not live like that anymore. There was some form of support up here, and so they found a home and a little more stability.

Evangeline has thrived in many ways since they made the move. She's an active student with a love for art and a willingness to work hard, and take on new challenges.

"I am a very physical person," she said. "I'm not an academic student at all. I've done a couple construction jobs, so I like building things. I'm more of a person who works with my hands, which is probably why I like art."

She has played several sports, and enjoys tae kwon do, which she had been studying in Longview before the pandemic began.

As for art, she has participated in the chalk art contest,and entered the congressional art competition in 2019. She loves to draw, primarily focusing on people.

Evangeline's immediate plans after graduation are to take a "fat breather." Then she will look for a job, even if it's flipping burgers. One day, she hopes to work as an artist.

In July 2020, she joined the Puget Island Fire Department and is now a member of the Cathlamet Fire Department. She has been attending an EMS class in Pacific County since January, studying CPR, basic life support, learning about medications and interactions, how to administer proper oxygen, and how to make a patient assessment.

"Being there has taught me there isn't a big difference between high schoolers and adults," Evangeline laughed. "Adults are basically teenagers with rights and experience."

"Pre-hospital care is very important," she added. "When I'm 18, I can officially be a firefighter. Right now I'm part of the cadet program, so I'm still a firefighter, I just can't go interior."

Evangeline is the daughter of Sarabeth Anderson.