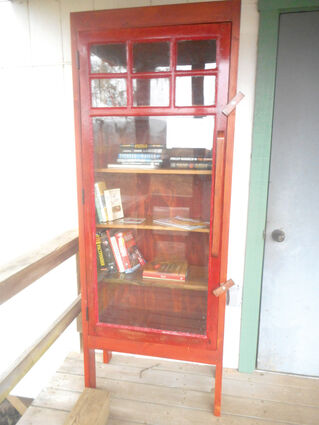 So it's Monday again. They just keep coming, don't they? For many of us, they are days to make lists, get started on work for the week and think about the trash pick up on Tuesday. What if we saw Mondays as opportunities to meet new people or to plan a day of service to the community? To make a date with a friend for lunch. I lunched with Trudy Fredrickson last week. She used to write this column, remember? She was such an angel to me when I had my cancer treatments. Trudy had eye surgery last week and is relieved it's not only over, but her eyesight is much better. I'm so happy for her. Since she regularly drives to California to see her family, she needs good eyesight!

Senior Lunches: Lower Columbia Senior Action Program, better known as CAP, is delivering take out lunches to Rosburg Hall for pickup on Thursdays between noon and 12:15 p.m. If you should wish to participate in the CAP Lunch Program at any time, please contact Diane Hollenbeck at 360-465-2991. The following meals will be served for the month of April 2021.

Goofed again: I knew better, but still got it wrong: Norman Anderson's wife's name is not Muriel, it's Myrtle. My age shows every day. It is surely not intentional. And have you noticed the Andersons planted daffodils along the fence line on their property, too? It's a great year for daffodils.

Grange Friends: If you like to read books, you probably know about the "Little Libraries" set up by fellow readers offering free books to the public and asking readers to donate books, too. There is no cost. The Grays River Grange has the cutest Little Library on the front porch of the Grange building in "downtown" Grays River. Built by Pete McGuire with an old window donated by Krist Novoselic for a door, it's lovely.

I have been a Grange member for 18 years. My first Grange meeting was in 2003. I met folks there who not only loved their community, they loved each other. Bobby Larson talked about his dream of a deep water port at Stringtown in Pacific County. Many of Bobby's dreams came true, like the Western Wahkiakum Water project that today provides clean, cold water coming from our faucets. Bobby developed that project almost by himself and cared enough to stick with it till the PUD agreed to take it on. It's important to remember and honor those who have done so much for us.

Another is Carlton Appelo. At Grange meetings, Carlton was always asking that letters of request, as well of letters of thanks, be sent to our elected officials. He made regular trips to Washington DC to meet with senators and congressmen to check in with them and report on projects in his home county. Perhaps you recall the development of Port District 2, which he helped found. Both Bobby and Carlton were visionaries who could see projects that would help the community. They are not here, but the work they did stands as reminders of what people can do when they care enough.

Roads Today: So happy to see we will get our one lane bypass road on 401 after all, hopefully soon. Be sure to say thanks to your county commissioners who got behind us and helped move the idea along. The commissioners had to deal with the increased number of cars on the Puget Island ferry as well, so it's been a challenge for everyone. Perhaps now is a good time to think about how our highways and roads were built in the first place.

Roads in the Past: For those who came here in the mid-to-late 1800's, the only vehicles they used were boats. Children were picked up by boats to get to school with a parent running their boat and picking children up along the way to the Seal River School, as an example. Women used skiffs to visit other women. Some men rowed small boats to Astoria to sell their milk stored in milk cans for the trip, or to see a doctor. As time passed, roads were built from trails used by neighbors so they could get back and forth to see and help each other. Hungry Highway was one of those. Women brought food, whole families came to help and so using horses as well as workers, a road was built.

The first Knappton road was built so workers could get down the Knappton Hill to work at the Mill. The Knappton Mill donated boards for the road as it was steep, making it hard to walk or drive teams over in deep mud. Knappton had a hotel, tennis courts, and nice homes near the water. Cementville, where cement was made, was built a bit further to the west providing good jobs there, too. Knappton was built entirely of wood on pilings also made of wood, so when it burned in July 1941, the whole town was gone. The fire could be seen from Astoria. Firefighters came across the Columbia to help fight it, but to no avail.

Another road structure to think about is the Bighill Bridge connecting North Valley Road to Upper Naselle Road. Think about the life of that early bridge, built of huge logs stacked to hold a wooden road surface. Dances were held on that bridge in the early years. And it was a good spot on a sunny day to stop and visit with neighbors or meet with a sweetheart. Remember the land was full of immense, high trees. Sunny open spots were not prevalent everywhere. Early men and women spent their "day of rest" cutting trees down, using their horses not to clear their own land, but to clear space for roads to open up their communities to the world. As more roads were built, less isolation impacted their lives.

Irene Martin's Chronology: In Irene's book, Beach of Heaven, A history of Wahkiakum County, she developed a chronology. Here are some dates to think about for us who live along the Lower Columbia in "Lower" Wahkiakum County:

It has always been the people in the small communities that built the cornerstones of our life today. "Lest we forget."

Word for the week: Appreciation