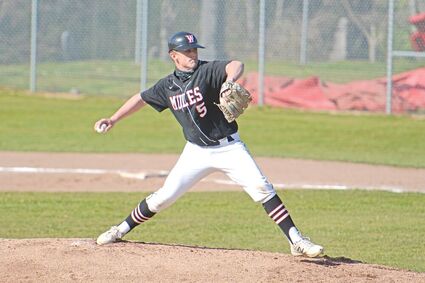 Beau Carlson pitched a full game as the Mules defeated the Rainier Mountaineers 10-0.

On March 31, the team traveled to South Bend and beat Raymond 23-2.

"It was a beautiful day at South Bend," Coach Marc Niemeyer said. "With so many games in a short time, we were able to throw guys who don't typically pitch in this non-league game. Jake Leitz and Grant Wilson both came in and threw a ton of strikes. We played the seniors the first two innings and then the young Mules took over." 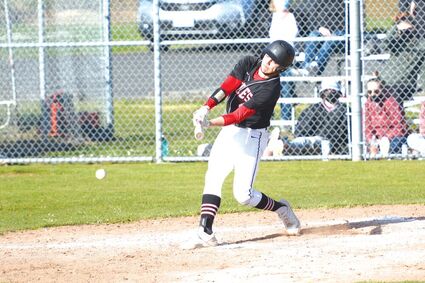 Dominic Curl gets metal on the ball for a hit.

"It was great to see all the young guys get five innings of baseball," Niemeyer said. "The seniors did a good job teaching the young guys their defensive responsibilities both during and between innings. It was a really fun game to be a part of as a coach watching all the communication between the seniors and younger guys."

On Monday, the Mules beat Rainier at home 10-0 in five innings.

"Beau threw strikes and we played great defense behind him," Coach Niemeyer said. Offensively we really had some timely hits and took advantage of Rainier errors.

Ashden Niemeyer was 3-4 at bat with one RBI. Beau Carlson pitched all five innings, he faced 18 batters and struck out eight, allowing two hits and no runs.