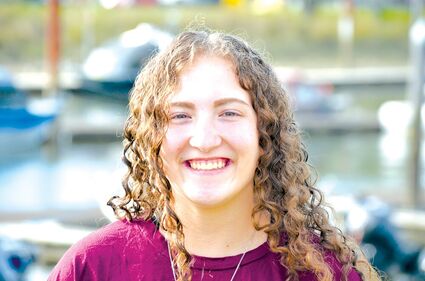 Mary Jane Neves is looking forward to attending Lower Columbia College in the fall, where she can continue to explore and find out just what it is that she likes.

She isn't totally sure what that is just yet, and knows there is a lot more out there to discover.

As for right now?

When it comes to teachers, she can't pick a favorite, but admits when she was a freshman, it was Mr. Cox, who she says always insists that he doesn't like "freshies."

"He has a dry sense of humor, which is something I like," Mary Jane said.

She's been studying German with Mr. Cox, and until the pandemic, she believed she would be going to Germany with the German Club this year. It would have been fun, and a bit of a challenge.

"I'm probably his quietest person," she laughed, "but it's doubled with the masks."

She's a lot less quiet when it comes to sports.

Whether she's setting up plays at short stop or setting up a hitter on the volleyball court, you can always find Mary Jane at the center of the action. She's hoping to continue playing volleyball in college.

"It's something I really like, but it will be really different because it's not going to be the same people I've played with," Mary Jane said.

If track and softball seasons didn't clash, she would have loved to run the hurdles, which she enjoyed in eighth grade.

"I like challenges, but I don't like trying something new, because I know I'll mess up," Mary Jane said.

Still, she manages to get in there and try, whether it's sports, starring in her classmates' anti-bullying video when no one else is willing to try acting, or riding horses when she and her sister Rebekah go to Florida every year.

"When I go there, that's my thing," Mary Jane said. "I ride all the time. It makes me feel free. No problems."

This year, her favorite class has been weight training, mostly because it's a self-motivated activity. In the past, she really enjoyed Jeff Rooklidge's classes, because they were able to be outside doing things, and learning about new species.

In her free time, she likes watching Netflix, or taking her friend's dog for a walk.

After college she hopes to do some of the usual things like get a house, get married, and have kids.

Mary Jane Neves is the daughter of Megan and Tim Neves.