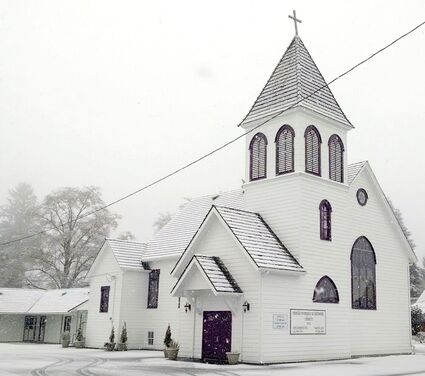 Monday, always a day of promise. What's coming and who's coming and what should I do? For many of us, it seems to be about change, like retirement or moving or building a new house. Saturday I met a movie stunt man who recently moved here from Malibu, Calif. Life here is a new world for him, I'm sure. Change and promise. Our little corner of the world surely is changing.

Appelo Archives in Naselle: "Our collection of Scandinavian artifacts on display in the museum has grown exponentially thanks to generous donations from Pirjo and Dirk Schulbach and Judy Gervais and Jukka Perkiomaki. Both the Schubachs and the Gervais/Perkiomakis have signed up as Lifetime Members of the Archives Center. We are recognizing them as Archives Angels. We also have more Scandinavian items for sale in our gift shop thanks to both Pirjo and Judy, including both Arabia and Italia glassware, wool sweaters, and tapestries. Some antique tools are also available for sale thanks to Dirk. Dirk and Ashley (our kitchen staff and baker), always share bread and pulla tips when he visits. Our Archives Angels are very magnanimous people bringing not only generosity, but warmth and smiles with them every time they visit. There are many Archives Angels in the community, and we would like to thank them all for their support and everything they continue to share with us at the Appelo Archives Center." (Message from Annika Kay, Director AAC)

Newcomers in Grays River: One of our "community gathering" spots is the county solid waste transfer station. I have met more folks there by just pulling up alongside them and unloading my vehicle. Last time I met two nice gentlemen, a father and son. The son, Kirkwood Dieke has purchased the Moody property on Fossil Creek Road across from the Gorleys. The father, Timothy Dieke, has come to help his son work on the property. Very nice folks. Word on Covered Bridge Road is that the big white house near the Covered Bridge has sold. "We now have a contract" is what I was told. So watch for changes there.

Grays River Grange: Remember the Grange is an ideal place to meet people, both longtime residents and newcomers. The Grange meets at 6:30 p.m. on the second and fourth Tuesdays of the month, so come to the Grange Hall near Duffy's to meet the Grange folks and learn more about what they do for the community. For one thing, they own and maintain the two lovely parks we have in Grays River, Meserve Park at the corner of SR4 and the west end of Loop Road, and Ahlberg Park at the Covered Bridge. Volunteers are needed to help mow those properties, so if you'd like to help, call Darlene Ammer at (360) 465-2613.

Photo of the Week: The Naselle Lutheran Church is a prominent fixture in Naselle. It's easily seen from the highway with lovely windows that tell visitors right away this is an old community. The Deep River Lutheran Church was built first by about 15 families. They held meetings once a month. In those years, a journey from Nasel (historic spelling) to Deep River was not taken lightly. Due to the hardships they encountered in getting from place to place, Nasel people simply did not easily get to know the people in the surrounding communities. In 1909, Nasel residents attending the Deep River Church formally asked for the pastor to come to Nasel every third Sunday. The pastor caught the steamer in Astoria, disembarked in Deep River and then walked or rode horseback from Deep River to Nasel. That meant that in good weather or bad he had to climb hills, walk rugged terrain and ford streams. For all this he was paid $10 a meeting. After services in Nasel, the pastor would probably stay the night with parishioners. The next day, he would make the return trip back to Deep River and catch the boat to Astoria. Small wonder the pastor would only come every few weeks. The Ladies Aid in Deep River (Ompeluseura) was formed in 1894, and in 1906 Nasel organized its own Ladies Aid. Part of the circle's function was social but there was a serious side as well. In addition to relief work for the needy, the Ladies Aid helped the Red Cross in both world wars. In 1909 the Ladies Aid bought the old landing which was on the very spot where the Lutheran Church now stands. The price was $300. The members decided to build a new church. Raising money was tough due to the Depression and jobs were scarce. Berry picking and church dinners helped raise money. The people worked together to complete the new church building. On October 19, 1930, there was a day long celebration. They now had their own church. It also cost $300. The men of the church made the dining tables still in use today. In the 1930's the church offered a bilingual Sunday School and an English service. The pastor came three times a month. In the 1940's the congregation's efforts were directed towards helping the Finnish war effort. In 1952, the congregation called its first resident pastor, Tauno Jarvinen. He spoke Finnish and English and lived in the old parsonage. In the 1950's a new parsonage and a Sunday School Building were completed and in 1967, the Naselle (spelling changed about 1920) Lutheran Church ended its bilingual services. Thanks to Sherry Hartline for this information.

Naselle Lutheran Church Spring Festival: All this historic information is meant to encourage all to attend the Church's Spring Festival on Saturday, May 1st from 10 a.m. to 2 p.m. You know how good the baked goods will be as well as the "Made in Naselle" soup and salads to go. There will also be plants and flowers for sale, quilts and other handcrafts. All proceeds will be used for the Church's new roof.

Senior Lunches: The CAP lunch menus for the last two weeks in April are:

Word for the Week: Promise