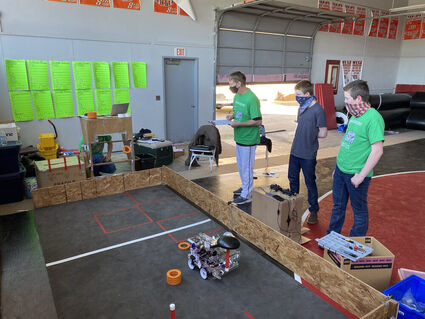 Coach Jeff Rooklidge with Micah Johnson and Pierce Leavitt evaluate the performance of the ring shooter.

The Wahkiakum First Tech Challenge robotics team has been working since December on its robot and documentation for regional competition on May 1. The league includes six teams from the Bellevue/Redmond area. Wahkiakum currently sits in 12th place out of 24 teams. They have already run 12 league matches. The final phase of the regional competition involves running their robot for six more matches, and then presenting to a panel of technical judges. 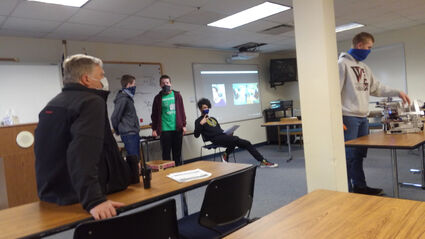 They began preparation for the judges by presenting to Mrs. Olsen's fourth grade class last week. The kids had a blast - literally - as the robot shot rings for the young students to catch. The fourth graders also helped run an experiment to determine ways to maximize shooting distance. Their next presentation was to the Wahkiakum Amatuer Radio Club Tuesday morning. This was a much tougher audience, asking technical questions to try to stump the team; excellent practice for the real thing. Radio club members were wowed. Their final practice presentation was to the Wahkiakum School Board where they were able to show off their robot running in a practice competition arena,under tournament match conditions. Only 70 teams are competing this year from across the state; another 60 teams could not even meet to build a robot.