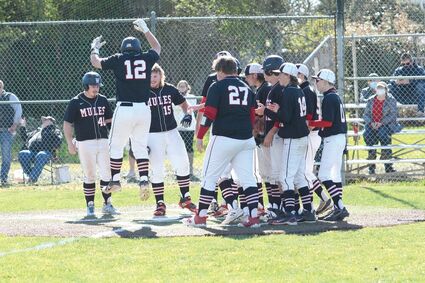 Tristan Collupy hit a home run in the Mules' win against Ilwaco.

In their last regular game of the season on April 22, the Wahkiakum Mules baseball team beat Onalaska 16-5 in front of a home crowd.

"It was Senior Day," Coach Marc Niemeyer said. "We clobbered the baseball with 18 hits as a team. It was a fantastic show the seniors put on in their final game at the Mule baseball field. I am so proud of these seniors and the men they have become. All seven of these men will be great fathers and husbands. Thank you seniors for letting me be a big part of your lives."

Ashden Niemeyer went 4-5 at bat, hitting a homer and a double, and was responsible for four of the Mule runs. Beau Carlson was 2-4 and hit a double. Grant Wilson went 2-2, hitting a double and driving in two runs. 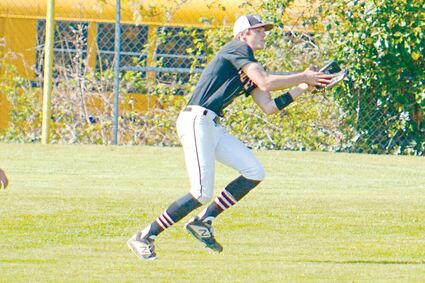 Beau Carlson catches a fly ball for an out.

District play started on Monday, and the Mules traveled to Ilwaco for a 22-5 win against the Fishermen.

"The team had an outstanding day at the plate with 19 hits in the game," Coach Niemeyer said. "We are excited for the opportunity to play another day."

The Mules' hopes were dashed on Tuesday when they lost to Toutle Lake, ending their season.