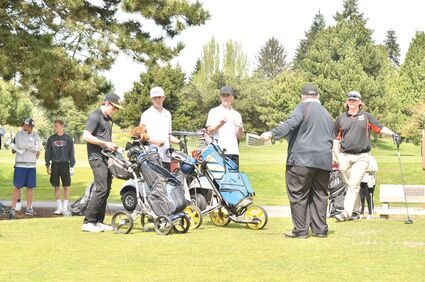 Coach Nick Vavoudis preps the first group of golfers before their round.

The Mule Train threw a wheel last week, and the Adna Pirates took advantage of the opportunity to capture their first District IV championship at 3 Rivers Golf Course and took the traveling trophy home for the remainder of 2021.

Braeden Salme led the Pirates, capturing the gold medal shooting an 86. Todd Tabor, Kalama, shot 87 for a silver medal, and Mule Brody Carlson captured the bronze medal with a 90. Adna's Aaron Aselton came in 4th at 93, and Logan LaBerge, Wahkiakum, came in 5th with a 94. 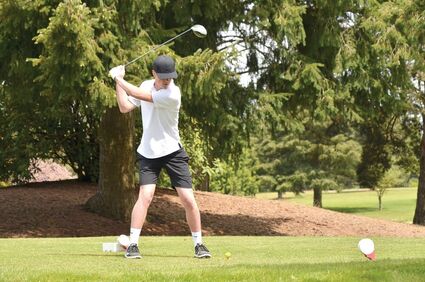 Brody Carlson tees off at hole one. He captured the bronze medal with a 90.

The Mule team settled for second place for the second time in a row, losing to Life Christian in 2019 and now to Adna who scored 49.5 team points to Wahkiakum's 36. Kalama finished third with 17, North Beach fourth 9.5, Toutle Lake fifth 8, and Winlock sixth with 6 points.