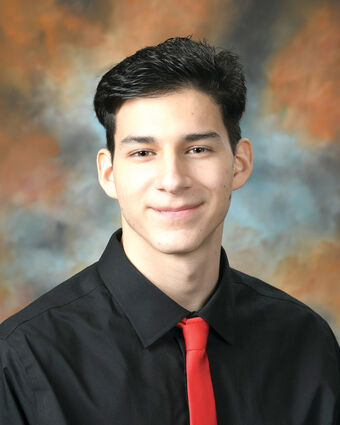 Wahkiakum School District has been a kind of educational bookend in Nathan Vallejo's life. He started kindergarten at J.A. Wendt, and 11 or so years later returned for his senior year and to earn his diploma at Wahkiakum High School.

He has family here, and so for a month every summer, he would return. As for his memories of kindergarten, he has a vague notion of someone named Hope, but that's all.

Nathan hasn't had any trouble adjusting to Wahkiakum High School, even though it's much smaller than the school he attended in California, where he shared the halls with what he guesses was about 3,000 students.

He enjoys math and science because the subjects come easily to him, but he's also having fun in Kyle Hurley's classes, simply because of the physical activity and the things he's learning in forestry class.

"My favorite teacher is probably Mr. Cox," Nathan said, "even though his work is hard, it feels like you are learning something instead of just sitting there reading a book and answering questions on it, which I'd been doing in California a lot."

Nathan hasn't participated in any sports or clubs at Wahkiakum, but during his sophomore year in California, he joined a Guitar Club. He plays acoustic and electric guitar.

"I try different picking styles on the guitars. Whatever I find fun, I like to do. Right now I'm just trying to do what I know, better," Nathan said.

Nathan likes playing the usual video games in his spare time, like survival games and shooting games, but has also discovered another genre, the rhythm game.

He's not totally certain what he wants to do after graduation, but he is considering the wisdom of working with his uncle, a local plumber, to see if that might hold a promising future for him here in this community.

"There's not a lot of competition out here," Nathan said. "Anybody who has to come in and service this town or this county has to come from Longview. While they are driving here, they are on the clock and getting paid for it. Customers have to pay a lot more."

As for life during a pandemic, he's learning to make the best of it.

"Covid has made socializing a little bit harder, but I've only recently started doing that, so I can't complain too much," he laughed.

Nathan is the son of Jill Vallejo.