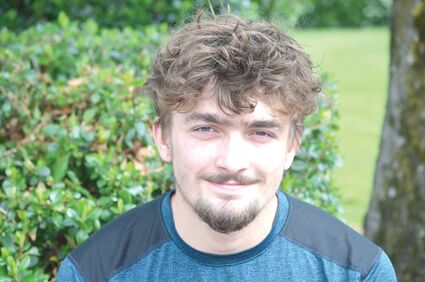 Like his brother Winchester, Remington Greenup was named for a gunmaker.

“[My parents] just thought it was a cool name because they go hunting a lot,” Remington said.

The sport of hunting never really took hold with Remington, whose friends sometimes call him Rem, or Remy.

He does love engines, however. His dad is a logger and mechanic, and Remington has been helping him as much as possible since he was very young.

“I loved to help,” Remington said. “Cars and trucks have been a lot of fun to me.”

He is knowledgable and practiced enough to have done a motor swap on one of his own trucks, as well as help his brother swap an engine in his.

If he’s not working on an engine, he’s out riding a dirt bike or quad on trails in Wahkiakum County with friends, something else he’s been doing since he was young.

He and one of those friends, Colton Bachman, are making plans to attend Wyotech, a college in Laramie, Wyoming, to study mechanics. More specifically, their interest is in diesel mechanics.

“She’s helped me out a lot,” Remington said.

Remington prefers math and sciences. He enjoyed his Envirnomental Science class with Mr. Rooklidge and weight training with Mr. Niemeyer. Right now, he’s taking Industrial Math with Miss Kincaid, where he and his classmates have been building 3-D models of houses.

Remington played basketball for the Mules and was a member of the FFA.

He didn’t grow up in the county. His family moved to Skamokawa from Billings, Montana, about five or six years ago. His last school was about the same size as Wahkiakum, he said, so there hasn’t been much of an adjustment.

“I’m not a fan of the heat and rain here, but in Montana in the winters it gets really snowy,” Remington said. “It’s fun, but you have to shovel it.”

He’s not totally sure what comes next, he just knows he wants to be a diesel mechanic, and he is looking forward to the next adventure.

Remington Greenup is the son of Scott and Karen Greenup.