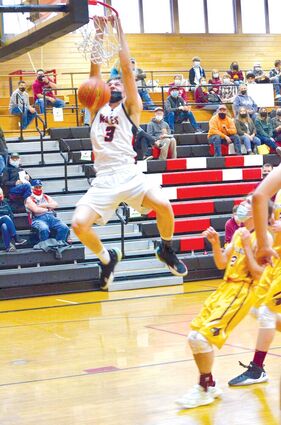 Jake Leitz put on a show for the home crowd with a dunk in the Mules' 80-34 win against Winlock.

"Kalama was a good win, but I don't think either team played all that clean," Coach Todd Souvenir said. "It's still early in the season. They did some good things down the stretch. I think we executed in the middle part of that fourth quarter. We could have made things a little easier in the last few minutes of the game. We definitely feel very lucky to come away with a win against a solid team.

"That was a big win for us," he added. "We did some good things but hopefully we learned from it as well."

On Monday, the Mules beat Winlock 80-34 in front of a home crowd. 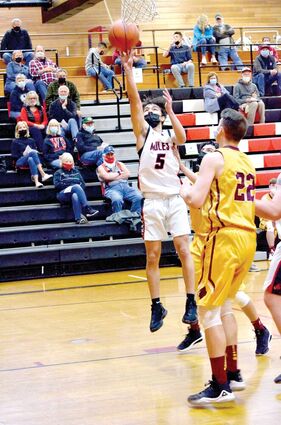 Royce Rodriguez with a quick layup for two of his five points in the Mules' win against Winlock.

"Winlock was a fun game for the guys," Coach Souvenir said. "We started out slow. Offensively, we are struggling to play consistently. We blew that game out in a four minute period, where we moved the ball well, and trusted each other, and played as a team."

"We are showing spurts and flashes of what we could be," Coach Souvenir said. "We are making gains and improvements in each game."