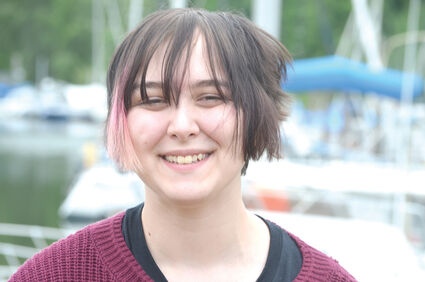 Cadence Hunt has been doing Running Start through Lower Columbia College for the last two years.

"It's pretty good," she said. "The college atmosphere is pretty much the same as high school, but there are more grown up people. There are also kids younger than me.

"Stop being younger than me," she laughed. "I feel like I'm getting too old too fast."

She had two quarters of normal classes before the pandemic started and shut everything down. She hasn't minded too much, flexible enough to work in the classroom or online at home.

Cadence had a notion to study psychology, but her thinking has shifted a bit, and she plans to get her general requirements out of the way for now, and perhaps eventually go into Human Resources.

While she likes a lot of teachers at Wahkiakum, her favorite is Audrey Petterson.

"She's so nice," Cadence said. "When I got in her car for Knowledge Bowl for the first time and she had OPB radio on, I knew we were going to work. She's got a cool sense of style too. I can't believe she bikes to school from Skamokawa and back every day. I hope I'm that fit when I'm her age!"

Cadence enjoyed the history classes she has been taking at LCC, especially World History.

"There is so much stuff that was happening and is happening that we just don't think about. It's mind boggling for me," she said. "There are millions of people all independently thinking at the same time as me. It's crazy to be aware of that. There are people having their own experiences and their own lives that I will never be a part of or know about."

After she graduates, she wants to move into an apartment with friends and take off at least a quarter or two from school.

Cadence would like to start in Longview "for a minute," and then perhaps head to Vancouver, WA. After that, who knows? Adventures, for sure.

At some point, she will return to school.

"I want to make money bags," she laughed. "If I get halfway there, I'll be happy."

While in school, she was involved in theater and 4-H. She was in leadership for awhile, and sports too, but her creative nature took her in other directions.

Cadence loves drawing, with a particular interest in character study. She especially enjoys animé, and has noticed that art teachers don't like to encourage it.

Cadence is the daughter of Kelly Guest and Kevin Hunt.