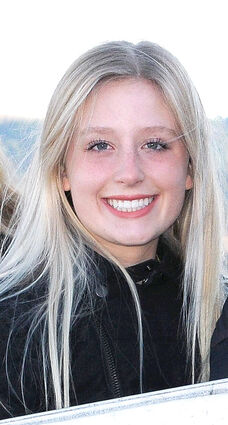 Wahkiakum High School senior Ellie Hiatt will be inducted into the U.S. Naval Academy Class of 2025 on Wednesday, June 30, in Annapolis, Maryland, before beginning "six challenging weeks of basic midshipman training as part of Plebe Summer."

The Naval Academy received over 16,000 applications this year, and Hiatt is one of 1,200 candidates selected to join the freshman class, or "plebe."

During the six weeks of training, plebes will have no access to television, the internet, or even music. Access to cell phones will be restricted, and they will only be able to make three phone calls over this period.

"The pressure and rigor of Plebe Summer is carefully designed to help plebes prepare for their first academic year at the Naval Academy and the four years of challenge which awaits them," the press release said.

The new midshipmen will learn seamanship, navigation, damage control, sailing, and handling yard patrol craft. They will also learn infantry drill and how to shoot 9 mm pistols and M-16 rifles.

They will be swimming, learning martial arts, basic rock climbing, and participating in obstacle, endurance and confidence courses, and more.

The U.S. Naval Academy was founded in 1845, and prepares midshipmen to be professional officers in the naval service. More than 4,400 men and women representing every state in the U.S. and several foreign countries make up the student body, according to the press release, known as the Brigade of Midshipmen.

The midshipmen will learn from military and civilian instructors, and are able to participate in intercollegiate varsity sports and extracurricular activities. Upon graduation, midshipmen earn a Bachelor of Science degree in a choice of 25 different majors and go on to serve at least five years in the U.S. Navy or U.S. Marine Corps.

Hiatt will represent the academy on their varsity soccer team.