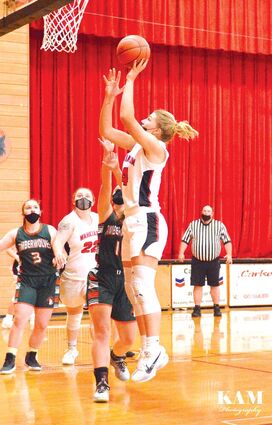 Jansi Merz puts up a shot in the Lady Mules' win over Morton/White Pass. Merz scored her 1000th point during the game.

The Wahkiakum Lady Mules basketball team continues its winning ways, beating four more teams this week, including two in the opening rounds of the district tournament.

Last Friday, the Lady Mules traveled to Longview to take on the 2A team from R.A. Long and won 78-48.

"R.A. Long was fun," Coach Rob Garrett said on Tuesday. "We got off to a hot start from the outside, but honestly, I wasn't happy with our defense in the first half. It was a good wake up call for this week though. The second half was much better defensively, and things started clicking. It was actually a great test run for our game against Ilwaco."

On Monday, in the first round of a single elimination district tournament, the Lady Mules beat Morton/White Pass, 88-23.

"It was a solid game for the team against MWP," Coach Garrett said. "We got solid play out of multiple girls, but there were two who stuck out. Paige had 15 assists. She is currently seeing the floor at a very high level and utilizing her ball handling to open things up for her teammates. The next big highlight was Jansi breaking the 1,000 point barrier with a 26 point display. Overall, it was a fun game and a district win."

On Tuesday, the Lady Mules moved into the quarterfinals of district with a game against Onalaska. The Lady Mules won easily 77-19. 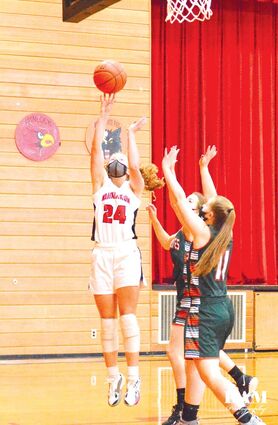 Megan Leitz puts up a shot for the Lady Mules.

"Tonight was a little bit of a revenge game," Coach Garrett said. "When we went up to Onalaska earlier this year, they simply out worked us. We made it a point to make sure that wasn't the case tonight. Our defense was constantly flying around, and we attacked the rebounds. Then we looked to push it up the court. The entire team got solid minutes tonight, and it was nice to see the flow stay the same regardless of who was on the floor. It couldn't have been a better team performance for the last home game for this group of seniors."

The Lady Mules faced Ilwaco in the semifinals of the district tournament in Centralia on Wednesday, but the score was not available by press time.