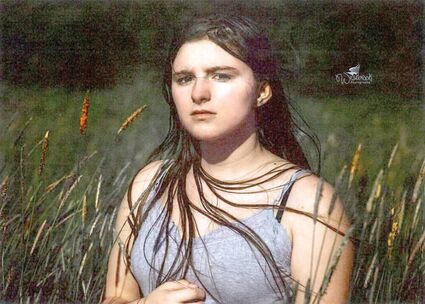 While Kendall Westcott will not be graduating with the Wahkiakum High School Class of 2021 on Friday, she is a senior, and she is graduating.

Kendall has attended classes at Wa-Ki-Hi in the past, but this year she made a transition to home school and its honors program.

She has three classes left before she graduates, including Spanish 2, government, and economics.

"It's been great," Kendall said. "I've been getting a lot of stuff done. There are a lot more classes and it's a lot more work."

If she is missing anything right now, it is her friends.

"She's pretty cool," Kendall said. "She really did help me a lot through the years."

Her two favorite subjects are art and history.

"I like learning about the past and how it connects," she said.

Kendall was involved in theater arts all through high school, and performed in a play, Love at First Thought in 2019. She is currently the secretary for the Wahkiakum County Republican Party.

After being confirmed at St. Rose Catholic Church, she volunteered with Faith Formation and ended up teaching catechism to fifth graders after their teacher took a trip to Mexico.

"I learned a lot. I have a lot more respect for teachers. One student dragged his desk across the room just because he didn't like someone else," Kendall said, laughing.

In her spare time, Kendall likes to hang out with her family, play games, cook, draw, and read.

"Normal life stuff," she laughed. "I like trying new recipes. I go online and if I see something interesting, I'll try it out."

Her most recent experiment was a chicken pot pie skillet, which she said was amazing.

Kendall has just completed her Military Entrance Processing Stations (MEPS) and joined the Navy Reserves. She will go to boot camp at Lake Michigan, sometime this winter.

It was an easy decision.

"I grew up military," Kendall said. "I always enjoyed the water and the military life."

She is still waiting for her rating, but hopes to be a Master-at-arms, which is essentially the military police. She also plans to attend school and study criminal justice.

"My goal is to be a detective, so this will lead me down that path," Kendall said.

Kendall is the daughter of Jessie Westcott.