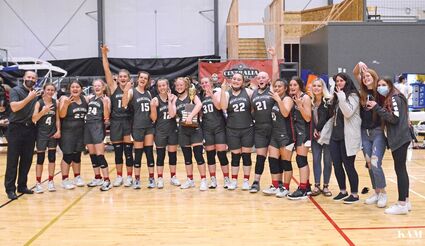 With sports seasons shortened because of the pandemic this year, the Wahkiakum Mules girls basketball team went as far and as high as they could go, claiming the crown in a four day District 4 2B tournament last week.

After winning on Monday and Tuesday, the Lady Mules took on Ilwaco and the Fishermen's Erika Glenn, who scored 58 points in their own quarterfinal game on Tuesday.

The Lady Mules beat Ilwaco in the semifinals, 72-31, and held Glenn to under 20 points. 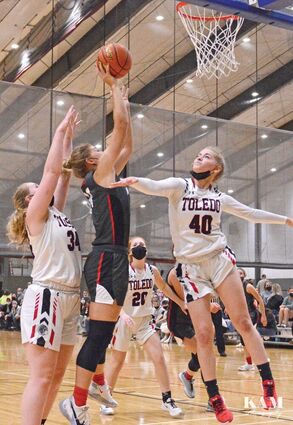 Jansi Merz put in 21 points for the Mules against Toledo. Todd Wilson photo.

On Thursday, the Lady Mules faced Toledo in the district championship and won 55-29.

"It was a great finish to the season," Coach Rob Garrett said. "Girls were playing some of their best basketball down the stretch. Our defense was a great team effort, and when we had trouble scoring, Jansi (Merz) would bail us out with a bucket."

"Three district titles in a row is no joke," he continued. "This group has worked extremely hard and earned their way into the record books."