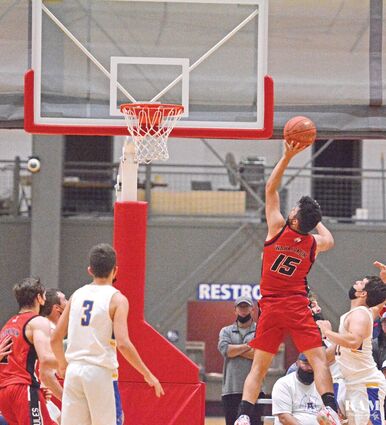 Mule sophomore Dominic Curl puts up the winning shot as the Mules defeated Adna by one point to claim third place in the Southwest 2B District Tournament.

Following two wins last week, the Wahkiakum Mules boys basketball team suffered a loss in the semifinals of the District 4 2B tournament on Wednesday. On Thursday, they were able to beat a physical Adna team, pulling ahead with a last second shot from sophomore Dominc Curl to finish the season in third place in the district tournament.

In the quarterfinals on Wednesday, the Mules lost to Napavine, 70-61.

"Going in, we knew they were a tough match up," Coach Todd Souvenir said. "Unfortunately, it wasn't in the cards for us. It was a really fun game from start to finish, and I was really proud of the way the guys handled it and how we competed. It was tough for the seniors to lose like that, and for the team as a whole. That night, our goal was to get into the district title game and have a chance to cut down the nets. You could tell that they wanted it."

"In the end, to compete with a team like that, and to lose a hard fought, close game against a very competitive group of kids and to have the opportunity to play the next day," he added, "we still had something to look forward to."

On Thursday, the Mules beat Adna 61-60 for third place in the district tournament.

"Without Brody Carlson, who was injured, and Jake (Leitz) scoring only three points in the first half, we got an extra lift from some of the young guys, Zakk Carlson and Jacob Johnson," Coach Souvenir said. "Adna had a physical and quick guy on Jake that was frustrating him a little bit."

"I'm pretty sure we trailed the entire game by a slim margin," Souvenir continued. "In the fourth quarter, defensively, we managed to hold them to five and to come out with a victory."

"It was really cool for this group, going into the season knowing how much offensive power we had, and knowing we needed to improve on defense," he added. "We ended up winning a game on the defensive end of the floor, playing man to man. We were also missing our number one defensive player in Brody Carlson. His quickness, defense, and physicality on the ball are definitely important to us."

In the final seconds, the plan was to let Leitz do his thing, Souvenir said, but when point guard Logan LaBerge found him double teamed, his eyes went to Zakk Carlson who was wide open. Carlson made a touch pass to Dominic Curl, in the corner.

"He was right in front of me, and as the pass was coming, I said, 'Get to the rim,'" Souvenir said. "Dom made a pump fake and went to the rim with one second left."

And the Mules pulled ahead by one to win. 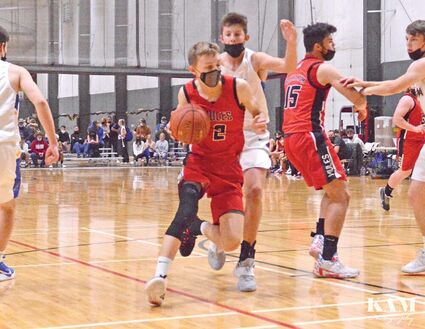