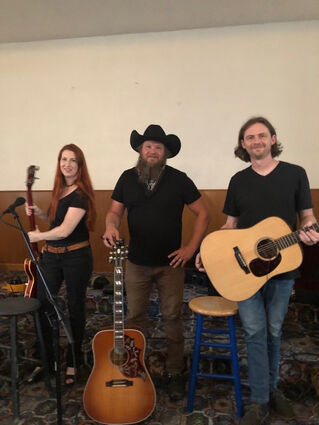 Some of the numbers were written about places where Carl's father grew up. They also played numbers from their new CD: "Hope is on the Rise." "Frankfort" and "Rain on the Southfork" were both songs about the Naselle area.

"Haywire" is a logging blues tune that Carl wrote in 2005 while working in the woods. "Lightning Wheels" was written while Carl was in Nashville. It had been recorded by Nashville artist Danny Griego.

Carl Wirkkala hails from Castle Rock. He has deep family roots in the Pacific Northwest and brings to life tales of ghost towns, trains and lonesome drifters through his music. Carl enjoys writing songs based on the stylings of Johnny Cash, Waylon Jennings and Bob Dylan. Several of his songs detail scenes from the different regions in Southwest Washington. He has been writing and performing for the past 20 years and has eight studio albums with another album on the way.

Carl Wirkkala has been performing regionally for over 15 years. His live-stream shows from his home venue, "The Cedar Tree," have reached fans all over the world.

Carl has been a popular performer at both the Naselle Community Center and the FAFF. He has been very supportive of the local community.