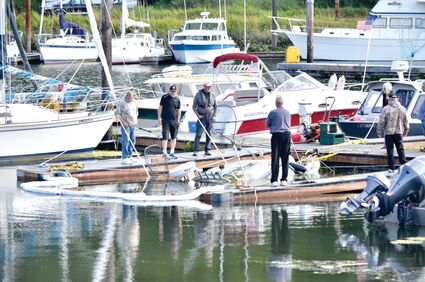 A sunken cabin cruiser at the Elochoman Slough Marina drew a crew last Thursday to develop a plan to refloat the boat.

One particular sport fisherman was looking forward to spending the early hours fishing on the Columbia River last Thursday when he stepped out on D Dock at a busy Elochoman Slough Marina to find his 20 foot Northwest aluminum boat in the drink.

It was a rough way to start the day.

Todd Souvenir, maintenance manager at Port 1, was already out on the river hoping to hook something. What he caught was a call, around 7:30 a.m., from the thwarted fisherman.

"I hate to call you and tell you this, but my boat sunk in the marina sometime early this morning," the man told Souvenir.

Souvenir notified the Department of Ecology and made his way back to the marina.

Not much later, Port Manager Jackie Lea arrived. Luckily for all involved, she had been through this before.

She pulled the fisherman aside and gave him his options. They could help him get the boat out of the water, or he could call a salvage team. It's up to you, she said, but it's got to be out today.

Why don't we try, the boat owner replied.

So just like that, port staff, and other members of the community who happened to be there stepped up to help, and a crowd formed around the marina as people tried to get a closer look at the process. Now and again, a drone was heard as it passed by.

Because a spill is always a potential concern, their first bit of business was to set a containment boom. Fortunately, at the end of the day, it wasn't needed.

The boat was still tied up, which was good news. Gordy Souvenir, Todd's father and a commercial fisherman, tied a lead line like a noose, and laid it down over a cleat on the boat, about five feet below the surface.

He pulled it tight.

"Sport fishing guys have no idea what a lead line is," Souvenir said. "It's a rope that sinks. It would have been hard to get a rope under the bow to start unless it was a rope with some weight to it."

They were able to get the bow up by putting straps on it and using a come-along to pull it up slowly, Lea explained.

While they worked, Lea made a call to another commercial fisherman, Larry Holland. He'd been up all night working, and was on his way home from Camas, but he didn't hesitate.

About 45 minutes later, he arrived with his bowpicker.

He didn't have much to say about that, but he was quick to praise other people involved.

"Billy Peek started making phone calls and getting pumps," Holland said. "He quit driving dump trucks just to go down and help. He got in there, he was diving down, hooking lines up. He did a really good job on it."

Lea clarified a bit more. Peek was diving in the water to loop the straps around the stern of the sunken vessel. The straps were then hooked to Holland's boat, she said, and Holland used the net reel to pull up the stern of the sport fisherman's boat.

Peek wasn't the only one to get in the water. Port employee Jerry Nakonsky did some diving as well, helping out any way he could.

Once they were able to bring the vessel level with the water, the volunteers started pumping the water out with all the pumps they could find. Meanwhile, Tom Merz, a fireman who was assisting, went to the fire station to get a trash pump so the boat could be pumped out faster.

The work completed, Holland towed the boat to the launch, where the owner pulled it onto his trailer and headed to Portland for repairs.

People speculated about what caused the boat to capsize.

"Everybody was betting that he didn't put his plug in," Lea said.

"The fish well pumps water into it to keep fish fresh," Lea said. "Somehow the wiring got shorted and it continued to pump water into the vessel."

One doesn't have to spend time on the river to know about the sometimes deep seated animus between commercial fishermen and sports fishermen, but that day, it wasn't present.

"The guy needed help, and we all chipped in and helped him out." Holland said. "I'd seen the boat around before, but I'd never met the guy. It all worked out for the better."

It also speaks volumes about the remarkable crew at the Elochoman Slough Marina, who were able to help a fisherman out on one of his worst days, all the while fielding calls and solving problems for other customers during the busy fishing season.

Nakonsky heard someone say, "If I'd known it was like this over here, well, I'm going to start fishing over here more often, you guys stick together."