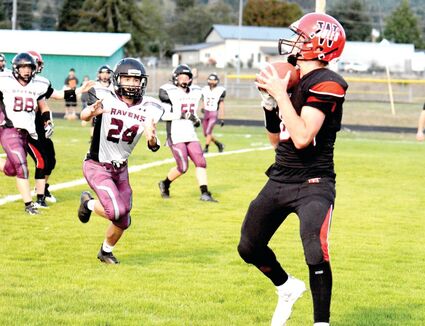 Zakk Carlson hauls in a Brody Avalon pass for a touchdown in the Mules' 32-0 victory over the Ravens.

The Wahkiakum Mule football team opened their season with a 32-0 shutout of the Raymond/South Bend Ravens last Friday.

It was a win in the first game from new head coach Ryan Lorenzo and his assistants. 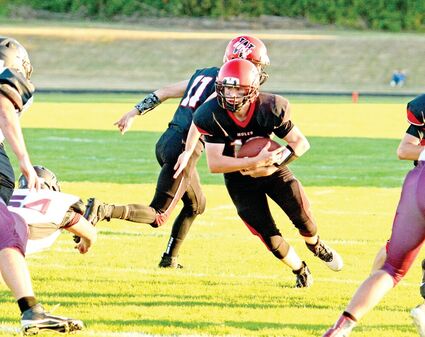 Gabe Moon heads to the end zone for one of his two touchdowns last Friday.

The Mules scored twice in the first quarter, first on a 2-yard run by Gabe Moon and later on a 15-yard pass from Brady Avalon to to Jacob Johnson.

In the second quarter, Dominic Curl scored on a 4-yard run, and Avalon completed a 4-yard pass to Zakk Carlson. An extra point kick gave the Mules a 25-0 lead at halftime.

The Mules added another converted touchdown in the third quarter, a 3-yard run by Moon.

Moon ended the game with 49 yards on eight runs; Curl had 41 on six carries, and Johnson gained 28 yards on three carries.

Lorenzo said he was excited about the play of the Mule offensive and defensive lines.

"They dominated," he said. "On multiple plays, the entire defensive line was in the Ravens backfield."

The Mules will head to Mossyrock this Friday. The Vikings have only 12 players turning out.