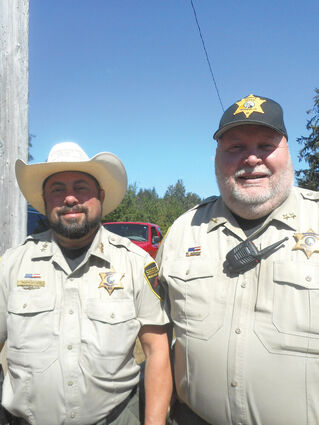 September 11 is National Emergency Responders Day. This week it seems appropriate to honor our own emergency responders as we get close to the 20th Anniversary of September 11, 2001. I remember that day very well and I know many of you do as well. I was working in my office at Fuller Seminary and heard on the radio. I drove to Fred Meyer in Ballard and bought a tiny TV so we could see for ourselves because it was so unbelievable to imagine. We were all stunned and quiet because it was difficult to see it happening. I know many of you have stories much the same. It was like Mt. St. Helen's erupting, but this was man made and thus worse. I wonder how many of our young people know much about that day. It seems as we move on from continual conflicts like two world wars, Korea, Vietnam, Iraq and Afghanistan, war becomes an everyday thing we take for granted. I pray that is not the case as more years go by. Lord, grant us peace.

Photos of the Week: #1 Sheriff's Department: At last week's Senior Lunch Club's luncheon, Sheriff Mark Howie and Undersheriff Gary Howell joined our group. They try to come to one each month, and their presence is most welcome. They listen to the group, answer questions, and update us on what's happening for them in the county. Mark told me he has 20 positions in his department, including dispatch, corrections, deputies, jail, civil and emergency management. He also has seven reserve deputies plus search and rescue. They are available 24/7 and cover the entire county.

Photo #2: Naselle Fire Department: The whole group of volunteers came together for this shot, sent by Nate Engleson, along with an update on Chief Doug Sandell. "Hi, Karen. I'm just letting you know Doug Sandell is home after his five week recovery from liver and kidney transplants. He was doing so well they let him come home early. Initially they told him it would be up to three months before he would be able to leave the hospital. He will be recovering at home with his wife for a while."

For much of his working life, Doug has been a log truck driver for Harvey Johnson. I first heard about Doug's situation from Bud Strange who sent me information on the activities folks in Naselle were doing to help raise funds for Doug's health care expenses. He is healing well. Individuals, businesses, and others in the area, including Astoria and the Peninsula, came together to help raise as much as possible to help him with his bills. The big garage sale last spring raised over $30,000, and I'm sure more has been given since. May God bless Doug's healing and get him actively back on the crew soon. If you would like to donate to Doug's expenses, send a check made out to Doug Sandell to 52 Upper Naselle Rd, Naselle WA 98638. And thank you for caring.

Photo #3 From Nate: "The Naselle Fire Department got together when we heard he was on his way home. I decided to text everyone to welcome him home just a few minutes after he arrived on Wednesday. Eleven members showed up. We then grabbed the trucks and drove to his house. The first truck in line was the first truck we bought new back in 1956. For our welcome home parade for Doug, we had four fire trucks, an ambulance, and a rescue truck. We welcomed him with lights and a siren or two. Doug's a huge asset to the community and the Naselle fire department where he's been Chief since 1989. We are so happy to have him back and at home. Best of luck, Doug!"

Harvest Festival October 2: Lots of flyers and Facebook messages are advertising a Harvest Festival on October 2 from 10 a.m. to 5 p.m. at the Miller Homestead at 5127 SR4 west driving west past the Deep River Highway Bridge. The Miller Homestead sign on the left will show the location. It is the third left hand turn after crossing the Deep River Bridge. The flyer advertises hay wagon rides, games, hay bale maze, live music, vendors, photo booth, and pumpkin patch. Admission is $25 for family and $8 for individuals. Pumpkin patch and hay wagon rides will be open every Friday and Saturday till the pumpkins are sold out. Vendors are welcome. Contact Christina Miller at (360) 783-2891 or email: millerhomesteadmarket@yahoo.com to register as a vendor or to get more information about the festival.

Rod Run at the Beach on Peninsula September 10-12. 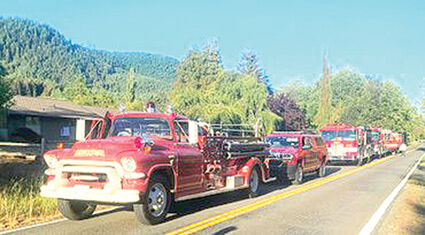 Fiber Arts Festival at Fairgrounds in Skamokawa. Pre-register for classes at http://www.wahkiakumfair.org. I have attended many fiber arts events in years past. Seeing the creativity with fabric and fibers builds our awareness of how art can be found in so many places. Attending is a great idea as the winter months are coming when we need inside activities and how better than to knit, quilt, make a rug or needlepoint.

Covered Bridge Dinner: Set for October 4 at the Bridge in Grays River. A limited number of tickets will be available soon.

Word for the Week: Gratitude.