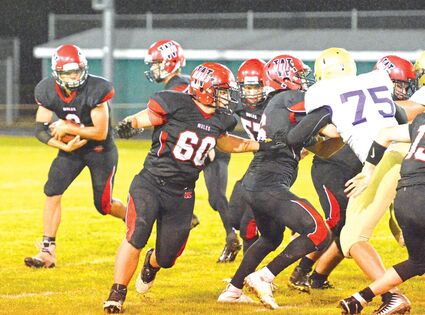 It didn't take long for the defending Class 2B football champions to show the Wahkiakum Mules that they're still a potent force by posting a 62-10 win over the Mules last Friday.

The Mules twice pinned the Onalaska Loggers deep in Logger territory early in the first quarter, and twice Logger running backs broke free for long runs. The first set up a 1-yard touchdown at 10:52 of the game; the second was an 81-yard run that put the visitors up 16-0 at 6:56 of the first quarter.

The Logger defense stymied the Mules, and Onalaska led 32-0 after one quarter. 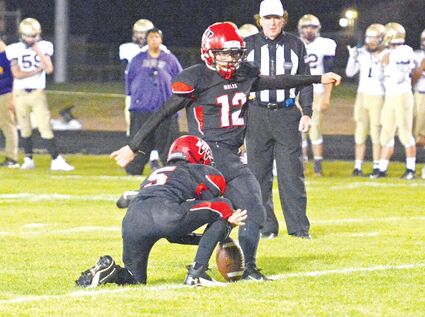 With Grant Wilson holding, Elijah Cothren kicked a conversion and a field goal for the Mules.

In the second quarter, the Mules got on the scoreboard with quarterback Brodie Avalon finding the endzone on a 1-yard run. Elijah Cothren kicked the conversion to make the score 32-7 at 9:52.

The Loggers punched in three subsequent touchdowns to lead 54-7 at halftime. They added one more in the third quarter. Cothren closed the scoring with a 24-yard field goal with 3:45 left in the game.

Onalaska piled up 420 yards of offense, all on the ground.

The Mules gained 39 yards rushing and 47 yards in the air. Dominic Curl gained 21 yards and Gabe Moon had 12. Avalon completed 4 of 14 passes for 21 yards, and Curl completed one for 26. Curl caught two passes for 13 yards; Jacob Johnson had two receptions for 29 yards, and Zakk Carlson caught one for five yards.

The season doesn't get much easier for the Mules; they'll take on 3-0 Toledo this Friday on the road.