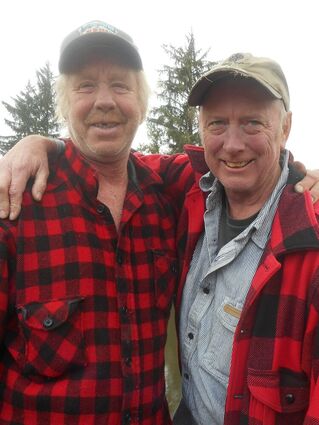 Rain and wind: I worked hard last week to prune, weed eat and clean up debris in my yard. The apples that fall from the tree at the top of the hill behind my house continue to increase as they fall down the hill. There are night creatures that come and enjoy them, I'm sure. Ben, my dog, used to bark at them, but over time he's given up. Each morning I sing the Johnny Appleseed song. Remember him? "Oh, the Lord is good to me and so I thank the Lord for giving me the things I need, the sun and rain and the apple seed. The Lord is good to me." Many folks used to sing that for grace at meals.

Photo of the Week: The sign at the new Wellness Center in Naselle tells us it will be open on Monday. This is exciting. Ocean Beach Hospital CEO Larry Cohen promised us it would be running by fall and they've done it. Went inside on Monday to see how it looks. It's beautiful and roomy and plenty of light.

The new site has three exam rooms, up from two at the current site and a dedicated blood draw room off the lobby. The new clinic was built inside the bank building in such a way that much of the building's charm was maintained and includes a new HVAC system, a new septic system and two ADA compliant bathrooms.

People driving through Naselle will now be more impressed than ever. When a community like Naselle has a health clinic in a modern, fresh and clean building right on the highway just down from a large school, the message to visitors is, we care about our people and our families that live here. That's a major improvement over what we had before, and it's thanks to Bank of the Pacific. Be sure to let them know how much you appreciate their gift of the building to the Hospital District. And certainly thank OBH for taking on the project!

And thank Ted Swanson for helping us have a clinic all these years. Many of us have gone to the "old one" and it's served us well, but it's time for a new beginning. As the community has grown, so has our need for a bigger clinic, and now we have it. As I remember, the Wellness Center will have an open house sometime this fall, so I'll be checking in with Larry Cohen to see when that will happen. Appointments will now be Tuesday through Friday. If you have not yet signed up with Lori Sharrow at the clinic, maybe now is the time? They accept Medicare patients.

Diane Gray: The gathering last Sunday for Diane Gray was well attended; even Ben, my dog, was there. Diane knew Ben well and so he was welcomed as family. He was fed a lot of sausage. Diane would have liked that. The Duck Inn's new "outside" room was perfect. When the sun came out, folks wandered out on the deck. When the rain came back, folks wandered back to be undercover to visit. Good job, Trudy Fredrickson. It was a lovely honoring of your sister.

Book Sale Report: Amy Hunt reported that the Friends of the Timberland Library used book sale made $866.50. That is a good income for that two-day event. I thought of the sale when the internet went out during the storm. We even had thunder and lightning which is not an everyday thing here. Without internet, the alternative is? Books! Some of my neighbors played cards, and John Footh probably worked on his most recent picture puzzle, but what did others do? They read a book.

Property sales: Many properties have been for sale this year and most have sold. Mike Swanson told me there are not many listings available now. The folks who bought the Zerr property have also purchased the Abbott's white house on Covered Bridge Road. The pastures and herd can be seen from that house, so it made sense to buy the house. Folks from Durango, Colorado, bought the upper piece at the junction of Covered Bridge and Barr Roads. The house at the far end of West Fairview is in the process of being purchased by buyers from Utah. The Blaine house that Cat and Jon Wrasse had for sale has sold. A new camping site has been developed on Hull Creek Road just beyond the Fire Hall. I want to meet all these folks if I can. New people bring ideas, energy and questions. It's up to all of us in the area to say hello and help them as they settle here. I hope you'll join me in knocking on their doors and welcoming them. Invite them to a Grange meeting or a senior lunch or to church or for coffee.

Seal River Project: Recently at a county commission meeting, Commissioner Strong reported that the Washington Dept. of Fish and Wildlife (WDFW) has plans for a project on Seal River. Laura Brown, WDFW projects manager, called me on Monday to explain there is no firm plan for a project on Seal River at this time. It is an idea that's being discussed, but nothing has happened to even study the idea yet. Like Deep River, Seal River is a slough that begins in swamp areas, such as the north side of SR 4. It starts as a creek, then as it gathers more and more water, it becomes a slough that wanders all through the area below the highway until it empties into Grays River just across from the end of Mill Road. It is a large body of moving water by that time, so it is an important body of water that can become a threat for flooding. By removing the tidegate, fish will be able to get up into the north side, if the project is well planned and studied and if all landowners agree to it. So let us not jump ahead and get concerned at this point. One of the best outcomes of the difficult Kandoll project is that everyone knows now that all involved should have a voice and be heard. I have no doubt that will happen with any projects in the Grays River Valley in the future. Attending the next diking enhancement district meeting would be good for all of us wanting to know more. The next meeting will be held Oct. 13 at Johnson Park at 5:15 p.m. Hope to see you there. And remember, the district needs new commissioners and you can put your name in if you're interested.

Senior Lunches: Senior Lunch Club's next luncheon will be on Oct. 6 at noon at Rosburg Hall. CAP box lunches are available on Thursdays by calling Denise at (360) 762-3111.

Word for the Week: Stewardship.