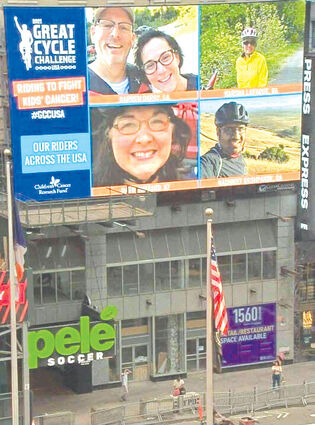 Marsha LaFarge participated in a fundraiser to fight children's cancer and found herself on a Times Square billboard for a few minutes in September. LaFarge, in yellow windbreaker, is pictured top right.

Wahkiakum County resident Marsha LaFarge likes to stay active, and she's found a way to make it beneficial for others too.

In September she participated in a fundraiser, The Great Cycle Challenge, which asked her to ride a hundred miles in 30 days while raising money to fight children's cancer.

The event also led to an exciting and unexpected moment for LaFarge and her family and friends.

The organization asked participants to upload photos, and that's how her face ended up on a huge billboard in Times Square in New York City for a few minutes this month.

"That was fun," LaFarge said.

She and her husband, Mike, who rode with her, cycled on Puget Island, at the refuge, and even did a couple rides out of town for the fundraiser. LaFarge's longest ride was 22 miles.

She also did another event to raise money for breast cancer.

She's looking for her next challenge, but admits it probably won't be until next spring, when the weather starts to warm up again.

"They are good causes," LaFarge said. "I figure as long as I can do it, I will."