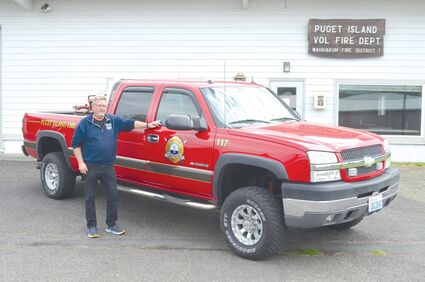 The Puget Island Fire Department has a new command vehicle.

The command rig will not stay at the station. Instead, it will remain at PIFD Chief Mike Beutler's house, or if he goes out of town, it will be at the home of another chief officer of the PIFD.

It's already been used to respond to numerous calls, allowing the incident commander to get on the scene quicker, and make a size up.

Several times they were able to hold off the fire engine.

"That's one of the things insurance companies want to see," Beutler said. "They would rather not see an engine roll out of here if somebody in a vehicle like that can go and say they are not needed.

The benefits don't end there. It's a people mover.

Volunteer membership is higher than ever, and historically they've only had eight seats available when the department responded to incidents in their two fire trucks.

"This morning we had a call and we had 11 people show up," Beutler said. "That shows you the strength of PIFD right now. Having a vehicle like this, it will give us the ability to carry people who would be driving their personal vehicles."

It's a brush rig.

Taking the large fire engines off pavement is ill advised, so this is another way that the new rig is beneficial to the department. In the past, PIFD depended on District 4 coming in with one of their rigs, Beutler said. Now they can go out into the fields themselves.

"A wildland skid unit was provided by Ohrberg (Const.)," Beutler said. "It's on loan to us until we come up with something we really want to have."

The skid unit fits in the back of the truck and has a tank, pump, and hose.

It also has the potential to be used as first response for medical emergencies on the Island.

"We want it to be a vehicle that serves multiple purposes for the fire district," he added.