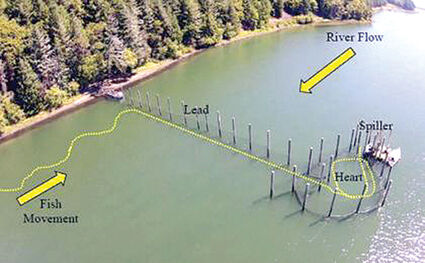 When the Cathlamet pound net/fish trap is in operation, migrating salmonids are guided to a live box where they can be classified and, if appropriate, harvested to support the trapping research program of Washington Department of Fish and Wildlife (WDFW). WDFW photo.

Last Thursday, the majority of the Wahkiakum County Planning Commission voted to deny a permit application for a project to build a fish trap on the Columbia River near the Elochoman River mouth, with only one person voting in favor.

They were there to review an application for conformance to the Shoreline Management Master Program prior to submitting a recommendation to the Wahkiakum County commissioners, but it wasn't clear if their vote was addressing conformance or the project itself.

The fish trap in use near Nassa Point and the one being proposed have been designed to research alternative fishing gears in hopes of reducing bycatch, to track fish run timing and stock composition, and more.

Another fish trap, located in Cliffton Channel, is not associated with the project.

They passively corral fish for studies, tag or catch for release, and track survival and migration patterns, Jorgenson said. The second location was selected based on historical records of trap locations in the area.

The project is funded by the state of Washington.

Jorgenson addressed a rumor about profits from the project.

"None of the profits from the sale of those fish go to Wild Fish Conservancy or Blair Peterson," Jorgensen said. "They go to the state to offset the cost of their biologists to do the research."

"As for catch, on a good year, we may remove 1,000, maybe more, hatchery coho," Jorgenson said. "This year's forecast is for 159 million, that's 0.009 percent of the return. I don't think that the traps are going to catch so many fish that they're taking a substantial amount out of the river or out of the hands of any user group."

According to Jorgenson, data has shown that chinook salmon survival from the original trap was 99.5 percent and steelhead was 94.4 percent.

Modifications have been made to the design, and they are hoping for better results at the second location.

This screenshot shows the purpose of the hearing on the shoreline permit application.

Jorgenson responded to questions and concerns from members of the community for the better part of an hour.

They asked about pilings, the selected location of the proposed fish trap, how this would affect sport fishermen, why it was happening in Wahkiakum County, and more.

"My husband has been doing research on this for over 20 years," Tammy Peterson said. "He saw the writing on the wall. The decline in salmon runs, steelhead. He has been passionate about this fish, our hatcheries, our sportsmen, our commercial, everybody.

"The main goal of these fish traps is to monitor the runs, see what is in there, to help the state say we have this much coming in, we don't have to wait for Bonneville for the release to go through. We get sportsmen more time, we can get the commercials more time."