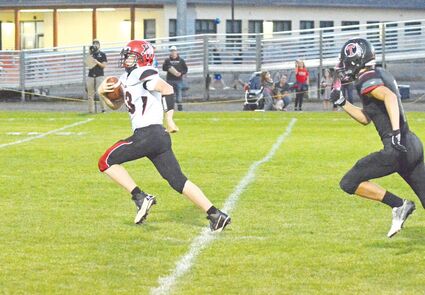 Gabe Moon heads for the endzone on a 46-yard run for he Mules against Toledo.

The Wahkiakum Mule football team encountered another powerful Central League football team when they traveled to Toledo last Friday where the Riverhawks ran to a 44-17 victory.

The hosts led 15-14 at the end of the first quarter. Toledo got on the scoreboard first, but the Mules scored twice to take the lead. Gabe Moon scored on a 47-yard run at 5:32 and followed with a 7-yard touchdown at 2:35. Elijah Cothren kicked both conversions. Toledo took the lead on a 56-yard run seconds later.

The hosts added two more touchdowns in the second quarter to lead 30-14 at halftime, and they added a touchdown in each the third and fourth quarters. 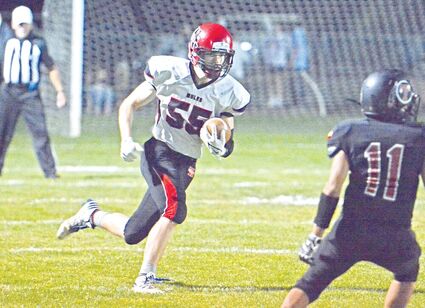 Cothren kicked a 34-yard field goal for the Mules in the third quarter for their final points.

The 2-2 Mules host the 1-3 Toutle Lake Ducks this Friday in the annual homecoming game.

The Ducks have been switching between 8-man and 11-man games, earning their first win against 8-man Oakville and falling last week 24-12 to the Stevenson Bulldogs.