FOS auction coming to a close this Saturday 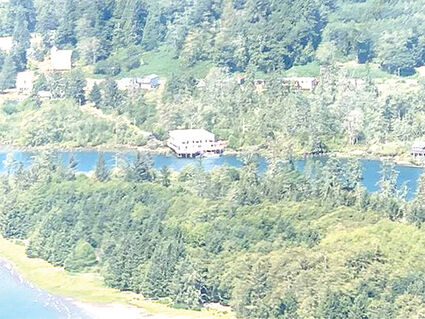 WET START--As this week begins we certainly are having a soggy day, so I'm happy that we had a nice Saturday and hopefully the forecast for a dry Monday and Tuesday came true, as the rest of the upcoming week looks pretty doggone wet! Fortunately for us, the forecast often changes at a moment's notice and we wind up drier than planned, so we'll keep our fingers crossed that this latest storm system will veer to the north of us. However, if it does happen to come straight at us, it definitely looks like we'll have multiple days of "boots weather" and hopefully that won't turn into "we need a boat" weather, as that's been known to happen around here sometimes. Here's to being prepared, just in case!

My apologies for somehow omitting a couple of birthdays last week, so my sincere and very belated birthday wishes go out to Jonnie Lawson Knowles' daughters: Heidi Knowles and Heather Knowles Ratcliff; hope you had a wonderful day last Friday!

Those celebating anniversaries this coming week are Greg and Lori Parke, Jason and Rochelle Wallin, Mr. and Mrs. Greg Bain, Mr. and Mrs. Travis Gibson, Herb and Anita Mosteller and Wayne and Karen Bell are celebrating their 40th anniversary this year. May you all have awesome celebrations on your special days!

LIONS CLUB CALENDARS--I hope you got any corrections or additions that you wanted made to the LC calendar leaders of the Lions Club and I hope you've ordered your calendar by now as well. I'm not sure how much time you have but if you haven't ordered yours yet, be sure to call Carol at 360-795-3337 or Renee at 360-849-4003 right away; calendars are $10 each and make great Christmas gifts.

FOS AUCTION--You still have a couple more days to bid on items in the online auction that is currently being held by the Friends of Skamokawa, but beings "A Cornucopia of Treasures" ends at 5 p.m. this Saturday, Oct. 23, you'd best be getting that bid in right away! The deadline had been last week but it was extended a week, so hopefully you've been able to log in and have some fun shopping the "new" way and getting some great items and helping out the FOS in the process. If you're getting this paper on Thursday, then you can even head up to Redmen Hall between 10 and 2 and check out the auction items in person. You can call the hall for more information 360-795-3007.

ANOTHER GARAGE--Quite awhile back I mentioned some other service stations and garages in the area, but I was notified of yet another one that I'd certainly never heard of from Kari Kandoll, so I thought I'd toss it out there and see if anybody else knows where this may have been located. "The Hammerly Garage" had an ad in an old 1926 WA-KI-HI annual, which said it was a place for general repairs, automobile sales and service, with the motto: "We aren't happy unless you are" at the bottom of the ad. Sadly, there was no other information, like the owner's full name or an address. So, we're reaching out; does anybody have any information on this place?

COUNTY FUND RAISER--Just to be clear, the GoFundMe.Com fundraiser, listed on Facebook under the heading of the Skamokawa Fire Association organized by Ashley Brooke Tawater, is actually a county wide fundraiser. I am pretty sure everybody figured that out after I listed all the other agencies that are involved in this event in my column last week, and all the things that they were doing and the places they would be going, but I just wanted to reiterate that in case someone thought this was just for Skamokawa's benefit. So, here's hoping you'll all take part and donate a toy for a child, food for the people and pets or just donate money (so the group can purchase what they need) to this very worthy cause for those in need this holiday season. Remember, this is happening in December so you've got some time to get prepared, and they will have the parade, complete with fire trucks, traveling on the west end on Dec. 10, which is a Friday and then they'll be covering the east end on Sunday, Dec. 12, so here's hoping you're able to help all these various groups that are involved.

GREAT PHOTOS--There are many things about living in this area along the Columbia River that we are privy to that many others don't get to see, and one of those is being able to see all the ship traffic that basically goes right by our doorsteps; it's fantastic! Recently we got to see some real beauties on the water as the 951 foot "Ruby Princess" sailed by on its way to the Vigor Shipyard in Portland at the beginning of the month and then back out on Oct. 16. This was the largest ship (113 tons) to ever come into the Swan Island shipyard. The slighty smaller, 920 foot Norwegian Cruise Line ship, "Pride of America" came cruising up river last Friday and was headed to the same place, so having these two huge ships on our river was really spectacular. I was thrilled to see all the great pictures that many locals were able to capture of these massive "floating cities," as they were truly something to make you just stop and gawk at them in awe! These two cruise ships being in dry dock at the same time actually made history, as this is the first time such a thing has ever happened at the Vigor Shipyard, so that was a pretty impressive sight for all those folks that worked there or who viewed them tied up there. Of course, those ships passing right by us with our birds eye view from various view points, like Skamokawa Vista Park, was certainly impressive as well.

Beings the "Ruby Princess" will be sailing with passengers from San Fransciso on Oct. 31, it looks like I've "missed the boat" this time & I'll be spending Halloween at home; drat!

FOOD DRIVE--The Lions Club will hold their annual food drive early this year, so in spite of what it says on your Chamber calendar, the date for this is now Oct. 30. Please have a bag of non-perishables ready to donate that day.

FAIRGROUNDS CARNIVAL--Here's another reminder to bring the kids down to the fairgrounds in Skamokawa on Oct. 30 from 4 to 7 for the annual Halloween Carnival. Don't miss it!

HALLOWEEN PARTY--If you'd like to get in on all the fun on October 30, I would call our local hangout at 360-795-3655 and make some reservations as they'll have live music, great prizes for their costume party winners as well as other giveaways for football and basketball tickets and those TV's too, so don't miss out. All the fun starts at 9 p.m., so have a good time at the 10th annual Halloween Party for grown ups right here in Skamokawa!

SPREAD SOME CHEER--A WWII veteran (Navy Flight Engineer) and Pearl Harbor survivor, Jack Holder, will celebrate his 100th birthday on December 13. Considering his service to our country, which included fighting in the Battle of Biscay, the English Channel, Guadalcanal and the Battle of Midway, I think it's only right that as many people as possible help make his 100th birthday wish come true. All he'd like is to receive some birthday cards. I'd say that's a pretty simple request from such a brave man who has lived such a great, long life in the face of so much adversity in his younger years. So, I'm hoping our little community will help make this man's wish come true by sending him some cards to mark this very special birthday of his. Cards should be mailed no later than November 30.

CAME TO AN END--The tradition of Fathers' weekend at Washington State University has now come to an end for one former Coug, as Pete Sechler enjoyed his last trip to Pullman for this special time with his youngest son, Luke, this past weekend. Not only was it fun but the big traditional Fathers' weekend football game was a real thriller, with the Cougars beating the Standford Cardinals in the fourth quarter; yahoo Wazzu! That meant it was time for celebration, as there's nothing like a big win to cheer up the entire WSU campus! Luke will be the last of the four Sechler kids to graduate from WSU. Once again, time seems to have flown by and these grandkids of mine have grown up all too fast, so if you have little grandkids, enjoy them now as they sure don't seem to stay little too long!

COUNTING DOWN--It's hard to believe but there's only a couple of months until Christmas and it will be here before you know it. I hope you will consider doing your holiday shopping around town as most of our stores have gift certificates or cards available or they have some locally made things for sale. We have creameries that make and sell their products locally, as well as soap makers and craftsmen and artisans and authors and well, there's just a whole lot of things you can buy here that I'm sure would make a unique gift for somebody you know. There will soon be holiday bazaars and such around the area, so here's to supporting our local individuals who may not have a store of their own, but who sell things in various places like some of our local shops and at these upcoming bazaars. Think "local" and happy shopping, everybody!