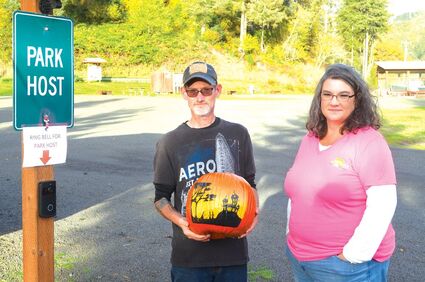 Dan and Rebecca Pierson, of Shreveport, Louisiana, are the current camp hosts at Vista Park. Dan is the artist who created the new trail signs at Vista. He's been painting a lot of pumpkins this month, including the one seen here. Rebecca is currently taking graduate level courses in counseling, and trying to create healthy boundaries with two Canadian geese named Bonnie and Clyde (or Thanksgiving and Christmas) that have adopted the Piersons since their arrival in Skamokawa.

A trail on the west side of Skamokawa Vista Park is in much better condition these days thanks to a mutually beneficial relationship between Wahkiakum County Port 2, the Department of Natural Resources, and the artistic endeavors of one camp host.

About two years ago, the Department of Natural Resources were there to deal with a fire, Port Manager Jeff Smith explained.

"I got to know the leader," he said. "They are always looking for a place to train new hires on trail building. We needed the trail improved, but we didn't have the resources to do it."

The crew comes when they can, Smith said. He remembers one occasion when they brought eight trucks and 25 people and worked for a couple hours to clear out a portion of the trail.

The crew fixed problems along the existing path, which is less than a mile, and added a new loop.

The district owns more land to the west, and Smith hopes there will eventually be more trails, and perhaps one day a raised boardwalk through the middle of the park.

Dan and Rebecca Pierson, of Shreveport, Louisiana, have been park hosts at Vista Park since June, and it's their fourth station in the last four years.

"We left the grind behind," Dan Pierson said.

After deciding they weren't getting any younger, he shut his machine shop business down in Shreveport, and the pair got involved in camp hosting. Their first gig was at a state park in Louisiana, but a visit to the Pacific Northwest in 2011 was unforgettable, and they decided that their next stop would bring them all the way back. They spent some time on Silver Lake and were camp hosts at North Beach Paws at Ocean Shores before more recently making their home in Skamokawa. 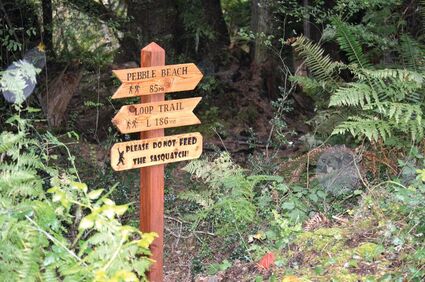 Please don't feed the Sasquatch: Camp host Dan Pierson made all the signs along the trail at Vista Park, including this one.

In that time, Rebecca managed to complete a bachelors degree at Evergreen State College, and now she's in grad school, studying mental health counseling. Dan, the artist, continues to find different ways to express his creativity.

"I love the hiking trail up there and I noticed there wasn't a lot of signage," he said. "I haven't done pyrography in 20 years, but I decided to give it a shot and just threw some signs together."

Despite the years, he had little trouble picking up where he left off, and eventually made eight signs.

"I'm a lifelong artist," Pierson said. "I used to do welded art, bottle trees. I literally had a business making bottle trees. It's not as popular up here."

One can check out his work on the trail at Vista Park and find more of his work on his Facebook page, The Iron Canvas.