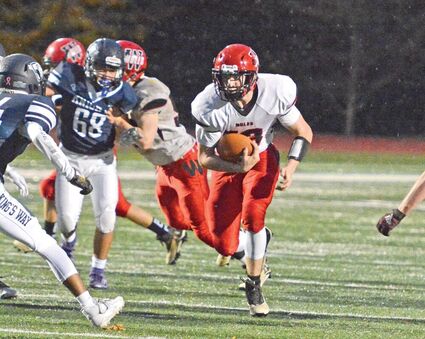 The 5-3 Mules enter the post season cross over playoffs on the road this Saturday, 7 p.m., against the seventh ranked 4-2 Forks Spartans. The winner moves into the statewide playoffs and the loser's season is over.

The Mules showed a good balance of defense and offense against King's Way. They gained 460 rushing yards and held the Knights to 65. King's Way gained 255 yards in the air, but four Mules, Dominic Curl, Elijah Cothren, Zakk Carlson and Jacob Johnson intercepted passes, and Cothren and Johnson each batted down a pass.

The Mules took a 14-0 first quarter lead with Gabe Moon scoring on runs of seven and 45 yards. Carlson scored on a 45-yard run in the second, and the quarter ended with two Mule passing touchdowns. First Brodie Avalon passed to Donavon Watson for a 12-yard score at 0:52, and next, Curl connected with Johnson on a 52-yard touchdown at 0:22.

The Mules led 35-7 at halftime. In the third quarter, Moon scored his third touchdown on a 64-yard run. He capped his evening with a six-yard score late in the fourth quarter, and Cothren kicked a 47-yard field goal as time was running down. 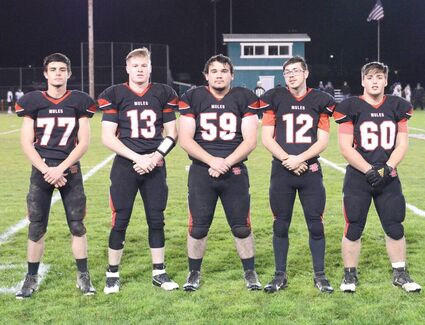 Against Adna, the Mule defense led the way. They forced the Pirates to punt on their opening drive; a Mule defender blocked the punt, and Landon Nielson recovered the ball in the endzone for a Mule touchdown. Later, Moon stopped a potential Pirate score by intercepting a pass in the Mule endzone.

The offense did its share, with Avalon scoring on a one-yard sneak early in the second quarter. Cothren kicked a 30-yard field goal in the fourth quarter to close the scoring.