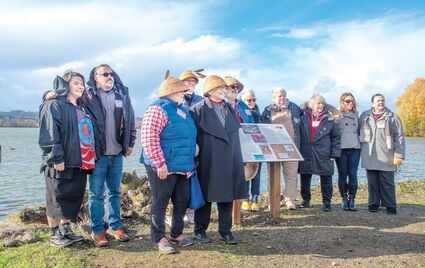 Wild weather and an overflow crowd were features of the dedication ceremony held Saturday for two Chinook Tribal Heritage signs erected in Cathlamet through a grant awarded by the Lewis & Clark Trail Stewardship Endowment.

One sign, located at Queen Sally's Park adjacent to the Cathlamet Library, tells the story of notable Chinook elder Queen Sally including the spring and well near the site.

The other sign at Elochoman Slough Marina highlights the Wahkiakum Band of Chinook who greeted and traded with the Lewis and Clark Corps of Discovery in 1805 near the site of the sign.

Town Councilor David Olson served as emcee, introducing Chinook Tribal Chairman Tony Johnson. Johnson spoke in both Chinook dialect and everyday English of the significance of Chinook heritage in Wahkiakum County, then led tribal council members in drumming, song and sacred chants, conveying in music and words the heritage of the site and the tribe. 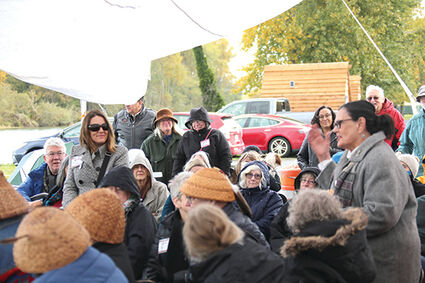 The event featured every kind of weather, including sunshine, pouring rain and gusty winds. At the midpoint a gust of wind literally lifted the canvas off the roof of the canopy, causing attendees and locals to stand together to hold the canopy in place during a temporary downpour.

The sign dedication was sponsored by the Town of Cathlamet, Port District No. 1, and the Wahkiakum Chamber of Commerce. A gift of a ceramic salmon plate crafted by Ruth Doumit was presented to the Chinook Nation on behalf of the community. In addition to co-hosting the Chinook Tribal Heritage sign dedication event at Elochoman Marina, the town also completed a temporary path and handrails to facilitate viewing of the heritage sign at Queen Sally's Park.