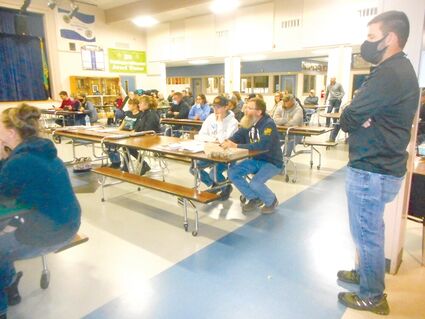 A large crowd came to the Naselle School Commons last week to discuss mask mandates and related issues with the Naselle/Grays River Valley School District board of directors.

On Wednesday, November 3, the Naselle/Grays River Valley School District Board held a special public meeting to discuss Washington State Guidelines for students playing basketball. After the special meeting, Superintendent Lisa Nelson issued her own statement regarding reasons for the meeting.

"It was part of the ongoing discussions for the past few weeks. I understand the frustrations. Most everyone dislikes the requirements in some form, but many value the opportunity for their children to play certain sports. Parents want something from the board: reassurance that their kids will have opportunities to play. Schools with wrestling programs already implemented Covid testing last spring, but since we do not have wrestling, we are just entering into our first period of high contact indoor sports, basketball. This represents a new era and makes people uncomfortable. We continue to advocate, but change is slow in coming."

At the special meeting, approximately 35 were in attendance addressing the full Board of Directors. The new Athletic Director, A.J. Smith, gave a presentation on the testing tool to be used. Statewide, 86 percent of schools are only testing unvaccinated athletes while 14 percent are testing every athlete. Principal Justin Laine reported that he also questioned all high school students regarding how many wanted to play with testing, how many wanted to play without testing. Results show 75 responding, 63 from potential players. All surveys had indicated the need for giving the public time to express their concerns, hence the special meeting was scheduled. In answer to a question regarding coaches being tested, the answer was that all staff involved with the basketball program would also be regularly tested. The school has a supply of tests that would be given in the nostril and conducted by the students themselves.

Before the meeting started, a woman asked if she could pray before the meeting began. She asked for honesty from everyone and that each person not hear only angry words as people speak. Her words gave all a goal to work toward for the meeting. Many questions arose including issues of civil rights. Some spoke regarding the legality of the state's actions since certain tests are still in a clinical trials stage. A man serving in the military spoke about his military training that showed how important it is to follow authority, understanding their leaders need to keep everyone as safe as possible. Members of the board were as responsive as they could be, clearly feeling challenged themselves regarding their own families.

After the meeting, Lisa Nelson added this comment: "It's unfortunate the situation we are in. Not everyone dislikes the same things, however. Our job is to look at the entirety of everything and make the best decisions where we have the latitude to make decisions. If not, we have been advised through multiple avenues that it would be unwise to disregard the governor's proclamation and go our own way. There is also liability in doing that. We are in between a rock and a hard place."