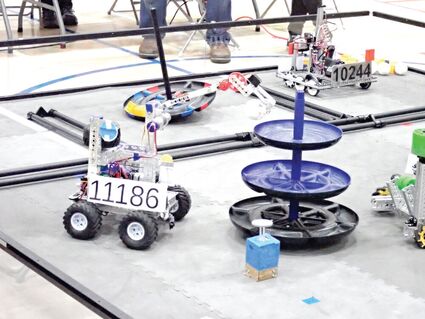 11186 pulls off more ducks than any other team as Patrick places the ducks this time. Photo by Jess Vik.

Last Saturday the Wahkiakum Mecha-Mules traveled to Battle Ground to compete with nine other teams from SW Washington in a robotics league round-robin tournament. All 14 team members were joined by two coaches and seven of our parents. For the past eight weeks, the team has been working on the details of building and programming their robot for autonomous mode battles and teleop mode battles. It all paid off as they were rewarded with a perfect score of six wins in their six matches, at four robots per match, and two teams per alliance. Wahkiakum was the only team to score over 100 points in a match, and they did that every match. A quote from Coach Rooklidge says it all: "Our team members focused on working together, doing all of the little things right, and the results show." We are currently ranked #1 in our League. Our next tournament is December 11 in Camas at Discovery High School. We will need to work even harder to stay on top, since four teams in our league qualified for state last year, and they want to go back.

One highlight, of many, was when our robot was knocked onto its backside by another robot, apparently out of the match, but, no! Lead driver Nathan used power and the robot arm to pull our robot back up and go on to win the match. The onlookers, both spectators and other teams, applauded.

Later this week the team is beginning its annual t-shirt fundraiser. Your business can get its logo onto our new t-shirts, banners and social media site. If you would like to help, please contact the team at: WahkiakumWohbot@gmail.com, or at the 4-H office or the high school office.