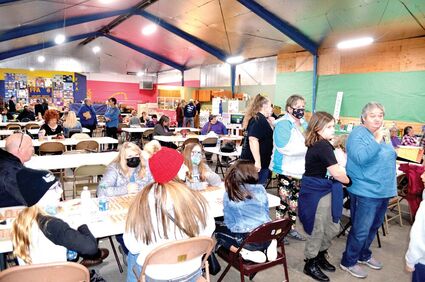 Bingo players showed up early on Saturday to get a seat, and maybe a hot dog or two, for the annual Turkey Bingo at the Wahkiakum County Fairgrounds.

Wahkiakum County Fair Manager Patty Dursteler was still practically bursting with joy on Saturday about the really good news she got last Wednesday when she opened her email at work.

The Department of Agriculture has awarded the Wahkiakum County Fair $250,000, the largest grant available, to make some much needed improvements around the fairgrounds.

"We got the grand prize, which is what the fair commissioner told me," Dursteler said. "It's pretty exciting."

Dursteler and WCF Treasurer Becky Thacker worked together quickly to get the grant application completed earlier this year.

"We are doing our best to keep this place viable," Thacker said. "The more attention that we give to the facility, the more people realize that stuff can happen down here."

The pair had three projects in mind when they applied for the grant, and two of them were fully funded.

The first project will cost $80,529 to build a new swine, goat, and sheep barn. The current barn is very deteriorated and left over from the old arena, which went down during the storm of 2008.

"They just used refurbished materials to put something up and it's never been touched," Thacker said.

The second project, estimated at $10,350, will improve the horse barn by creating a walkway to the third aisle and around the structure.

The largest project, for which they asked for $173,730 and received $159,121 from the Department of Agriculture, will be used to regrade and repave the fairgrounds.

"We wanted to go with the biggest necessities, so obviously the asphalt was a high priority," Dursteler said.

"The entire paved area is a hazard," Thacker added. "You cannot push a stroller or a wheelchair."

The funding and the coming improvements are a sign of hope to the many people who love the fair and fairgrounds, and volunteer so much of their time to keep it going.

"This will be quite the face lift for this place," Volunteer Pete Cooper said.