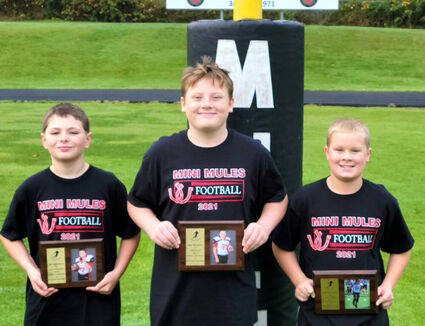 On October 30 the Wahkiakum Mini-Mules wrapped up their 2021 season, by defeating Longview 6-0 in another defensive shutout. The win secured Wahkiakum third place in their league, following a tough 12-8 loss to Castle Rock in the semi-final round of the playoffs.

The 4th quarter, game-clinching score occurred on a right side sweep, led by the blocking of fullback Joe Merz, who was able to clear the way for halfback Josh Moon to score from 30 yards.

The Mini-Mule defense was in lock-down mode, causing four Longview fumbles and intercepting the ball twice, picked off by Moon and Chris Stewart. Wahkiakum also battled injuries during the game, which forced the Mini-Mules to get creative on both sides of the ball. On the final defensive series, Moon was able to strip the ball from a Longview running back, which was recovered by defensive back Max Ohrberg. The recovery allowed the Mini-Mules to kneel out the game for the win.

At the end-of-the-season banquet, three Mini-Mule sixth graders received significant recognition by achieving a huge feat. Moon, Aiden Scott and Kasey Tomlinson were awarded with Iron Mini-Mule awards. From the third through sixth grades, all three players attended every practice and game, without any absences. Two other players (in addition to the aforementioned three) were also awarded with IronMan awards for just the 2021 season (Merz and Teagan Ray).

The coaching staff was very proud of this group of football players, which was the smallest team in the league (age and size-wise). Despite the challenges, the group grew as a team and achieved much more than their size and experience would have suggested. This performance shows promise for the future of Wahkiakum Mule football.