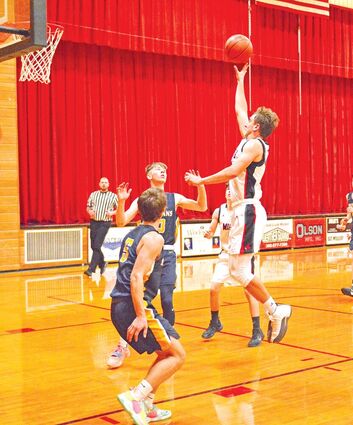 Brody Avalon goes up for two of his 26 points scored in the Mules' 65-31 win over Forks last week.

"I thought we came out and played with good energy," Coach Todd Souvenir said. "You could tell we had some first game jitters. Everybody got some solid minutes to get the jitters out.

"Other than Brodie [Avalon], we are playing guys who have very little varsity time. The guys were really active on both ends on the floor, and I thought we did some really good things. Winning the first game is always a good way to get things started."

"It was a fun environment and a good competitive game early in the season," Coach Souvenir said. "They have a lot of shooting guards. We struggled early in our zone defense, but I was really pleased with the switch to man to man and how active the guys were.

"Offensively we struggled to get some good looks and get the ball in the hole. But overall, that game was a positive, mainly for how we competed from the beginning to the end, regardless of the scenario."

The Mules host Stevenson Thursday (today) and travel to Willapa Valley on Friday and then to Adna on Monday.