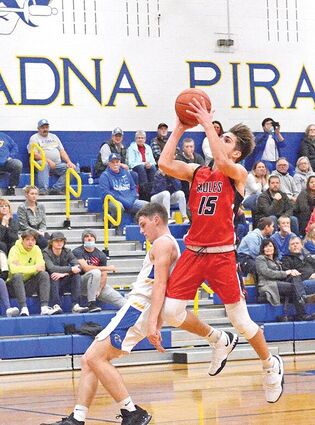 Mule Zakkary Carlson gets his shot off despite the defense of an Adna Pirate. Photo by Todd Wilson.

The Wahkiakum Mules boys basketball team won one game at home this week and lost two on the road, bringing their overall record to 2-3.

On Thursday, the Mules hosted Stevenson and won 66-50.

"We got off to a really good start, and shot the ball well," Coach Todd Souvenir said. "Too many turnovers kept Stevenson in the game. It was much closer than it should have been. We've got to cut down turnovers and second chance opportunities, regardless of who we play."

The next day the Mules were on the road to Willapa Valley, where they lost a close game, 64-60.

"We got off to a good start offensively," Coach Souvenir said. "It was a really competitive game from start to finish. We just settled in that game for too many threes. We've got to inside a little more and finish at the rim more consistently. They have some guys at the post that played physical and they had some shooters. They are very similar to us with a little more physicality inside. It was a good, fun, competitive non-league to prepare us for league.

"Tanner Collupy stepped up and did all the little things for us. He knows his role and plays good defense, rebounds. He does all the dirty work. In those last couple games, we wouldn't have been in the game if it wasn't for him stepping up and doing those little things."

The Mules shot eight for 35 threes against Valley.

On Monday, the team traveled to Adna and lost a tough game to the Pirates, 87-47. 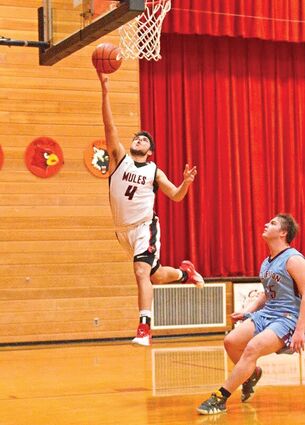 Dominic Curl puts in two points for the Mules against Stevenson. .

"They have some awesome shooters," Coach Souvenir said. "They only lost one player from last year. From the first quarter on, we were down 20, and it kind of opened up in the fourth quarter, but I still think it was a good game for us, and we could learn a lot from that team. They move the ball well, and definitely have some shooters."