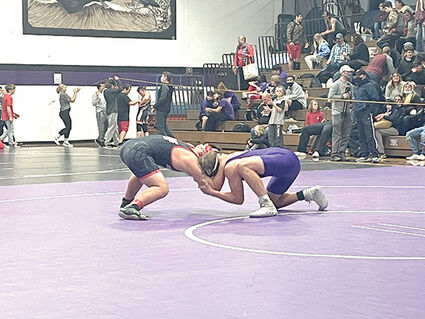 Senior Jerimyah Johnson grapples against his opponent from Warrenton in the championship match.

Multiple Wahkiakum High School Mule wrestlers found themselves on the podium this past weekend at the Warrenton Invitational.

Seniors Cayden Mendez and Jerimyah Johnson both took second place in their respective divisions for the boys brackets. Junior McKenna Mendez followed up last weekend's strong performance with a second place finish of her own in the girls tournament. 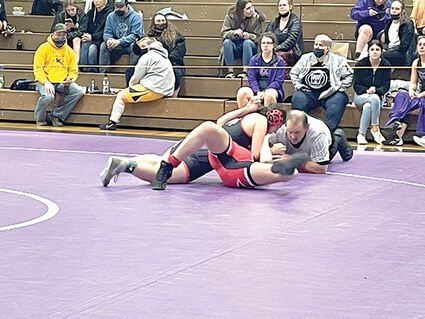 Senior Jerimyah Johnson grapples against his opponent from Warrenton in the championship match.

Roch, a first year wrestler with less than a month experience, matched up against last year's Oregon State Tournament qualifiers in the 152 lb. bracket. Hale dominated early competition with three straight wins by pin, only losing to the eventual first and second place winners in her bracket. After a first round win by pin, Ray's losses also came at the hands of the eventual winners.

"The competition has not been light early in the season" commented Coach Garrett Radcliffe. "There has been no easy path to winning at these tournaments and all of our wrestlers have taken the challenge head on and competed."

The Mules will travel to Ridgefield this weekend for a final competition before winter break and district competition beginning in January.