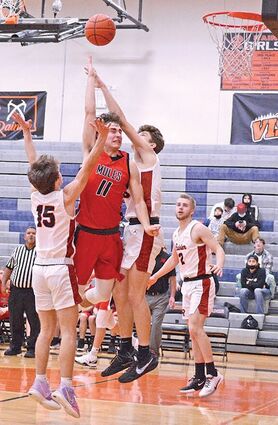 A double teamed Brodie Avalon puts up a shot against Rainier.

The Wahkiakum Mules boys basketball team won two games this week and lost one, bringing their overall record to 4-4, and their league record to 0-1.

"We always know Morton/White Pass is going to be tough competition," Coach Todd Souvenir said. "We didn't have our best shooting night. It was a really good game to have other guys step up. It was Dom's [Curl] first really good game of the season. He finished around the hoop and did a lot of really good things. He took four charges, and most kids don't take four charges in a season. Usually those lead to big momentum swings and it gets the teammates really fired up."

"It was a good competitive game from start to finish," Souvenir added. "We had other guys step up. It was a positive to get everyone involved."

On Saturday, the team traveled to Rainier and lost their first league game 56-50.

"We got out to a good lead, we were up seven at the half time," Coach Souvenir said. "In the third quarter we struggled to get the ball in the hole. [Rainier] got hot and hit some perimeter shots that got them back in the game. In the end it came down to them executing and us having a young team. It was a tough six point loss in their gym."

"I thought we did a lot of good things," Souvenir added. "We moved the ball really well, made the extra pass, we just couldn't get the buckets to drop when needed. We are a young team trying to build chemistry."

"For three and a half quarters, the team came together," Coach Souvenir said. "I thought in that game, that's how we are hoping we can play through the rest of the season. I thought our guys played with as much enthusiasm as Mabton. Hopefully we won't lose what we built over Christmas break." 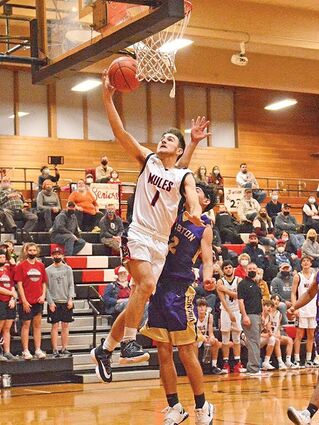 Braden Avalon puts up a layin in the Mules' game with Mabton.

The Mules will return to play after the Christmas break, hosting Onalaska on Tuesday, January 4.