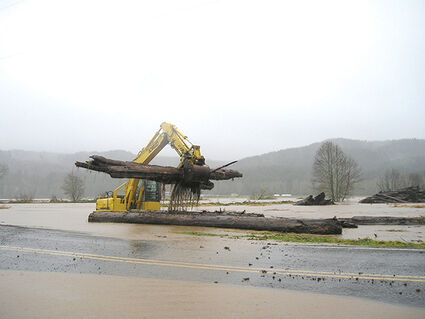 From the past: In the 2007 flood, called the Hurricane Storm, heavy winds and high water brought logs down from landings high above the Grays River Gorge. Bob Torppa used his equipment to clear logs out of his field.

We deal with flooding

"Water, water, everywhere, and not a drop to drink," is from the Samuel Taylor Coleridge poem, "Rime of the Ancient Mariner." The recent flooding brought to mind images of the sea rather than rivers. It gave us a moment to realize that indeed, Wahkiakum was, for a short moment, all one area with more water than we might have imagined ever. Every waterway and ditch, even dikes overflowed bringing water into places it's not been before, if ever, and all at the same time.

It's being called the "perfect storm." The forces of nature came together and reminded us we do not have as much control over our lives as we think, or we would like to think. First came the snow. Bob Torppa, long time equipment operator, went up high in the timber above Fossil Creek Road to see how much snow was up there. He found four feet which he knew would start to melt if any warm rain came, and it would head downriver toward the Columbia. He told me, "There's a big flood coming if this all comes together at once."

Bob, who was raised here, was correct. Bob reported several slides came down in the logging areas; at least one large one that has now closed some important roads in the timber.

The "king" tides, higher than usual, can create high water events around the winter solstice. The tides came into the valleys from the mouth of the Grays into Eden Valley, Deep River, Seal River, the Elochoman. The Naselle River had high tides coming in from Willapa Bay, all bringing in unusually fast currents, as high as the water could reach. Tide water met melting snow. Then add rain from above and it developed into more water than we've seen for many years.

All these factors brought in water everywhere. The Elochoman and Skamokawa also were hit hard. Damage was done from not only the quantity of water, but also the strength of the water's currents. From rain falling from above onto warming snow, to the tidal influx coming in from the Pacific Ocean, to the melting snow from the high hills, we had a perfect storm indeed.

Looking at a couple books on Grays River history, we can gain insights into the lives of people living along the Grays, and other rivers and sloughs in western Wahkiakum County. "Freshets" is a word often used to describe the winter/spring flooding here. Webster's Dictionary defines freshet as an archaic word meaning "stream sense" or a great rise or overflowing of a stream caused by heavy rains or melted snow. The freshets are not a totally bad thing because the silt and dirt stays on the land afterwards bringing nutrition for the pastures and fields.

After the first settlers came, they worked at controlling the Grays River's impact on their new pastures, barns and homes. Dikes became necessary and homes were, of necessity, built in higher locations so flood water didn't get to them.

In Ruth Busse Allingham's book, "Water Under the Bridge," published in 2001, she interviewed both old timers and more recent residents from Grays River. In her interview with Robert Pyle who owns the historic Ahlberg house by the Covered Bridge, Bob told Ruth, "We are lucky still to have space and not too many people right here. I hope that doesn't change too much. We're all affected by people being too numerous elsewhere and their demands on the earth becoming too great.

"We will feel it if the climate continues to change. For example, already our winter floods are becoming progressively worse most years. Even so, I think this is a very special valley. I hope it will remain as it is."

In another interview with Bob Larson, a resident and leader in the Grays River Valley, who farmed on the south side of the Covered Bridge, Larson commented that "when we were kids, every year we'd get so much rain we had a lake out here. The lake was right out here between our house and the Covered Bridge. We built a raft. In the wintertime when we had our raft going, I was the one who ran the 'ferry.' I would take a few kids over the lake. There were enough stumps out there that the girls could get on top of a stump and sit until I came back to get them. We had a good time out there, but mothers nowadays would have come out of their tree."

Brother and sister, Ernest Kandoll and Mabel Kandoll Herold told stories of their grandparents who in 1890 bought 28 acres on Grays River. Mabel told a story about women having babies in those days.

"You went by the tides in those days to Astoria. When Mom was expecting a baby, she would stay over there with her friend, Hilda Empi Juola, for two weeks before the baby was born and just a wee bit afterwards. It was a vacation for her, a vacation from life on the river.

"Ernest and Mabel talked of rowing a boat to school. They had to row two miles to Seal River, then up that river to get to school. Sometimes we were rowing against the tide in a rowboat. But I was raised on the water so rowing that boat, I was just like a kid with a bicycle. When Mabel and I rowed we had two sets of oars. We had a 16-foot rowboat made out of one-by-twelve foot lumber. When the water was going downhill in those freshets, we'd get on the edges where it would hit all the eddies because it might get a little easier going along the riverbank." 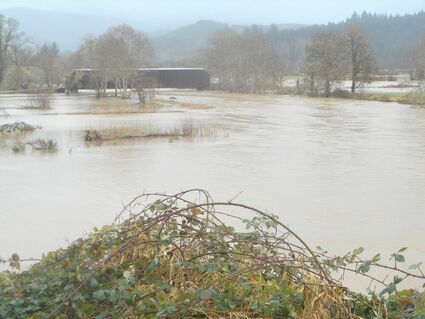 Grays River flooding turned the valley into a lake and closed approaches to the Covered Bridge.

In Irene Martin's book, "Beach of Heaven," the best book I've found with a well-researched history of Wahkiakum County, she states on page nine, "For Wahkiakum is a genuinely interesting place to be, full of anecdotes and stories of lives lived despite extremes of climate. While the texts all describe the climate as moderate, and in terms of temperature it may be so, in terms of rainfall it is not. When Lewis and Clark passed through the territory, they spent many of their days in pure misery, due to the constant dampness. Entries in their journals often read like a weather report: 'A cloudy, foggy morning, a little rain.' or 'A thick fog, can't see across river.' 'We are all wet and disagreeable, as we have been continually for several days past.' It is water more than any other influence that has shaped the history of the area and shapes everyday life even yet. Water in its many forms – dark November days of rain, sun showers, Eden Valley rain forests with lichen sweeping from the tree branches, mud slides, the fog that rolls out of the Skamokawa valleys, creeks filled with salmon spawning, freshets and floods, ponds whose level rises and falls with the changing water table, sloughs that sub-irrigate gardens and, finally, the Columbia River – has interacted for millennia with the humans who call Wahkiakum home. The small communities that were, both prehistoric and historic, once linked only by water, are still interconnected, though now by road. Yet, there is still the rain. 'You have to be committed to stay here,' remarked a friend who moved in twenty years ago."

Irene's book is a fascinating study filled with wisdom, data and stories. Even the quote at the beginning, "Thou hast changed for me my mourning into dancing," from Psalm 30:11, reminds us that we have a future in this little place called Wahkiakum. Hopefully, in that future we will learn to adjust our lives as much as possible when the floods come, help both ourselves and our neighbors to be prepared, and we will be able to do it all with our own "stream sense."

Senior Lunch Club will next meet on Jan. 19 at noon at the Rosburg Hall. On Thursdays at noon CAP's box lunches will be available at noon at Rosburg Hall. Call Denice at (360)762-3111 to reserve lunch boxes.

Word for the Week: Faith.